Boris Johnson faces a Tory party investigation into his comments about the burqa after he compared women wearing them to letterboxes and bank robbers.

But if there’s one group of people the former foreign secretary can rely on, it’s Daily Mail readers. Oh, and Rowan Atkinson. 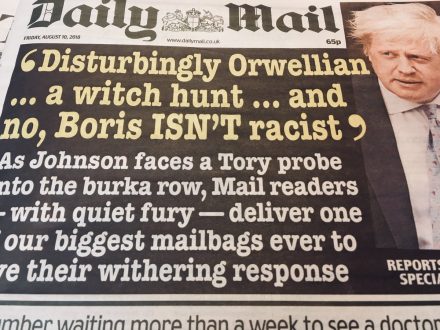 Of course Mail readers support him, they were the people he was thinking of when he said it.

The Daily Mail has reportedly received one of its biggest-ever postbags this morning in response to the manufactured Burqagate.
Supportive letters outnumber criticism of Boris by 20 to one.

And here are the only 11 responses you need.

Daily Mail readers have stated "Boris isn't racist" so that's that all cleared up.
In other news, children have said "YouTubers AREN'T annoying" and old people have claimed "Werthers Originals can be part of a balanced diet". pic.twitter.com/oP8NCmIUiD

Also from the DM mailbag …
"Immigrants ate my poodle", "We should install flame throwers at Dover." and "Hitler was very misunderstood by the lefty snowflakes." pic.twitter.com/m8tKDIwsDl

Why is is that Daily Mail readers are so in favour of a politician who openly makes Islamophobic jibes about Muslim people? I can't work it out. pic.twitter.com/wPPb6bmBN2

Mailbags. n. Racist bollocks. Derived from a conflation of the shortened name for the Daily Mail newspaper and a man's ball bags @vizcomic

next story
Breaking News: Unlike his presidency, this Donald Trump motorcade gag will run and run