The Daily Mail accused actress Maxine Peake of hypocrisy for doing the voiceover for an NHS recruitment advert while also criticising the government for not funding it properly. 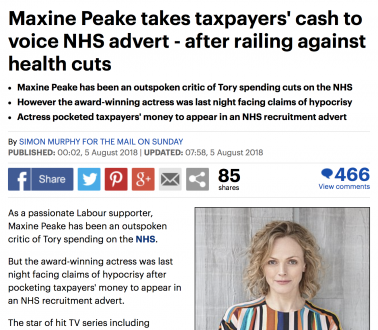 It quoted Tory MP Simon Hart as saying this.

‘It is hypocritical to deliver attacks on the Government for cutting public spending and then pocket taxpayers’ money to voice over an advertisement for more nurses.’

Now we’re not sure where to start, but fortunately Maxine Peake – Silk, Criminal Justice, that rather good Black Mirror episode – did and delivered this stunning comeback online.

A statement in response to the @DailyMailUK @mailonsundaySTL @MailOnline article about my recent voiceover work for an NHS recruitment campaign. pic.twitter.com/ahJwJsW7g9

You know when you think that you couldn't possibly love someone anymore than you already do? Then this.

Oh, did the Mail say something misleading or untruthful? What a surprise! At the end of the day, M was doing a job and should be rewarded. What she chooses to do that money is her own private concern. A kind, sweet gesture to make a donation to a good cause. X

And this would make it even better.

Maybe the @dailymail @mailonsundaySTL or @Mailonline would also like to make a donation to the Salford Trust as a way of an apology….

Do not mess with Maxine Peake. She is a good‘ un.