After having to explain mansplaining to men on more than one occasion, accomplished designer, author and wildlife photographer, Kim Goodwin, made a chart to help identify the irritating habit.

I have had more than one male colleague sincerely ask whether a certain behavior is mansplaining. Since apparently this is hard to figure out, I made one of them a chart. pic.twitter.com/7DZ1RTrB3R 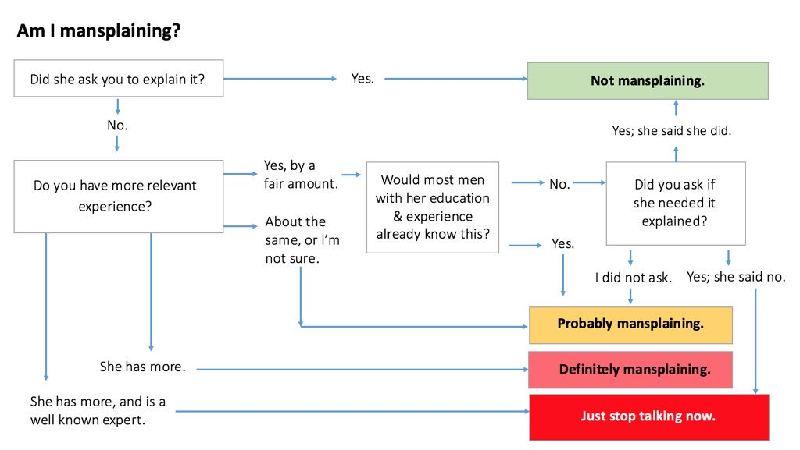 As you’d expect, it’s a thing of beauty: clear, concise and perfectly designed.

However, with a predictability that wobbles precariously along the high wire between hilarious and infuriating, a man decided that she was wrong and he was going to tell her why, whether she wanted him to or not.

Why make this a gendered issue? What you are basically defining here is condescending behaviour that can happen in any human interaction, regardless of gender. I take offence at the sexist implication that this is a male oriented behaviour. #shesexist #notallmen #genderequity

Far from being phased by his accusations, she gave him a measured reply that covered all points.

It’s gendered because the behavior is predominantly gendered. You might also notice I don’t say “all men” anywhere…the chart just asks if you ARE mansplaining. And by the way, men are by definition not targets of sexism.

He wasn’t the only man with objections, but she had answers for them all.

It’s been a long time since I was a girl.

So if you have a junior designer who was doing something completely wrong, and they didn’t ask for an explanation you should continue to let them make the error?

No. In a coaching context, you are explicitly in a teaching role.

Does this become toxic if someone is ignorant to a topic, but they happen to be a woman?

No. If you have more experience, a man of her experience wouldn’t know it, and you asked if she needed an explanation, you’re fine. It’s the assumption that you have more knowledge that’s insulting.