If you haven’t seen this ‘naughty penguin of the month’ sign before – or even if you have – you’re in for a treat. 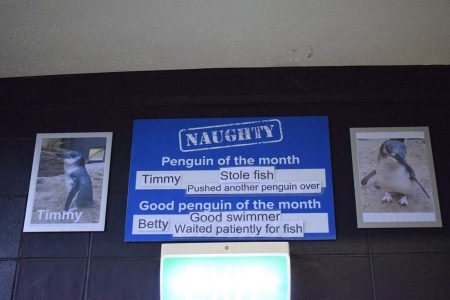 Because it turns out it’s just the tip of the iceberg.

So. Y'all remember this picture, right? It's adorable, charing and all over the shop since it first appeared in June last year. Well, there's more. Thing is, the National Aquarium of New Zealand has done it, as advertised, EVERY MONTH since then and, folks, it's a ride. Strap in. pic.twitter.com/FgQ7NBpGUB

July is criminally absent from the NANZ facebook page, but we rejoin our penguins in August, with some lightweight mischief from Pepper (nothing in the league of Timmy’s assult, though) and the punctual, but somewhat mundane virtues of the Captain.
Penguin Antics 4/10 pic.twitter.com/gX8HqvOW3V

Twitter, meet Mo. He’s about to rock the world of Being a Penguin in New Zealand: he’s a hoarder, all-round bad boy and STEALS FISH FROM OUT OF YOUR MOUTH. Meanwhile we have Flip teaching us all to stand up for our sweethearts when those dang kids come around
Penguin Antics: 8/10 pic.twitter.com/ehaz9yBUei

September gets violent, surpassing even Timmy’s infamous push. Dora has been attacking her keepers! Especially poor Tall Matt – noone needs that workplace hostility. Oh, and Captain’s back, being… I would say dull, but the capitalisation makes me wonder…
Penguin Antics 7/10 pic.twitter.com/vLiJtvVgtA

October calms things down a bit, with the worst offender being a lazy “egg-hogger” by the name of Mr Mac. Get in the water, mate, and give someone else a go on the egg! More importantly: look who’s turning his life around! Good work, Timmy.
Penguin Antics: 5/10 pic.twitter.com/dELx2DKl7P

Mo’s back, and he’s worse than ever. Now he’s not even eating the fish! Just DROPPING THEM IN THE SAND. What a dickhead. And lets be honest, Jack’s there out of clear favouritism – I remember when that sort of behavior got you dubbed an “egg-hogger”.
Penguin Antics 7/10 pic.twitter.com/RRjmLK1F82

Eagle(boo!)-eyed folks may have spotted I got a month out of sync, and the last one should have been for December, not for November as might have been assumed. We shall resume with the New Year!

New Year, and Dora’s back as the naughtiest, but far from attacking Tall Matt, she’s now demanding an escort to the feeding station. Hmm… If I didn’t know better, I’d think Dora had a little crush… Oh, and there’s Lulu, who is apparently just lovely.
Penguin Antics 6/10 pic.twitter.com/oI8pM2BQc1