Star Wars actress Kelly Marie Tran has deleted all her posts on Instagram after suffering months of racist and sexist abuse on social media.

But some fans took against her apparently because of her ethnicity and a chronic inability to distinguish between actor and character. Or grow up.

Here are the only responses you need.

You grown ass idiots that attack an actress because they portray a character you dislike are beyond a disgrace. You aren't fans, this is blatant harassment. Grow the f*ck up. pic.twitter.com/aSdnOhiNmw

On social media a few unhealthy people can cast a big shadow on the wall, but over the past 4 years I’ve met lots of real fellow SW fans. We like & dislike stuff but we do it with humor, love & respect. We’re the VAST majority, we’re having fun & doing just fine. https://t.co/yhcShg5vdJ 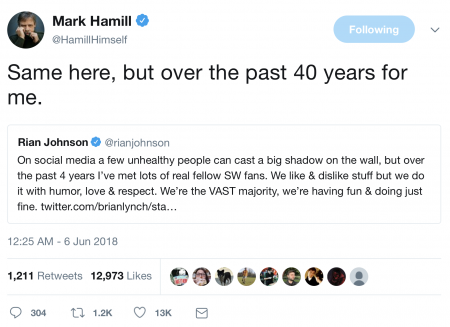 That’s her and Daisy Ridley forced off social media via abuse by basement dwelling twats. If only there was a link here… https://t.co/u7xyMrIdCy

Hey trolls, you're delaying the evolution of mankind, you stunted simpletons. https://t.co/nSZKDPs0NF

hey if you're a fan of things and feel like you are entitled, due to your fandom, to be a dick to other human beings, you're not a fan, you're just a cunt. https://t.co/3Cv72iNnvw

remember before online when you could be massively into a thing and never find out there was a community of knuckle dragging shitlord manbabies who also purported to be into that thing? https://t.co/Vj6NsuokTP

no misogyny or racism problems on the internet or anything like that https://t.co/bNEs4bgBPQ

Toxic nerd fans want us to separate art from artist when their faves are condemned for doing something racist but they'll also harass an artist because they don't like a character she plays. https://t.co/Fl9ndSkPrB

My son's favourite character in #TheLastJedi.
Will never understand any fans who watch these films and end up acting like Sith. https://t.co/dx4lEBs4Qs

I hope every single troll who fucked with this woman gets bullied mercilessly by someone else. Sorry but I do. https://t.co/zWlxC1kgQk

An adorable, excellent actress just silenced herself because people wouldn't stop harassing her for the crime of being an Asian woman in a star wars movie https://t.co/Oh14syTWx2

I'M FUCKING LIVID. IF YOU HAVE EVER SAID A MEAN THING TO KMT MEET ME IN THE FUCKING PARKING LOT I'M GONNA KICK YOUR ASS https://t.co/mSnj6iLUAF

far too many replies in here start with “i didn’t care for her character, BUT” which is SO ridiculously tone-deaf. no one asked for your opinion of her or her character or the movie just now. can you just say the “no harrassment” bit without your unsolicited opinions???

*woman chained up in brass bikini*