Katie Hopkins has won a complaint against the Daily Mirror after it wrongly claimed she had been detained in South Africa for taking ketamine.

The press regulator, IPSO, said Hopkins had in fact been detained by South African authorities for allegedly ‘spreading racial hatred’.

Katie Hopkins has won an IPSO complaint against the Mirror after it wrongly claimed she had been detained in South Africa over drug use. She was in fact being held for "spreading racial hatred". Full story to follow.

Which is presumably one of the few times when a paper says it is ‘happy to set the record straight’ and it means it.

The ruling lended itself to some golden responses and we’re glad to report they didn’t disappoint.

So let’s get this right: Hatie Kockpins who thinks you should be able to say whatever you want complains about the Mirror doing just that, whilst accepting she was spreading racial hatred but at least it wasn’t drug use? 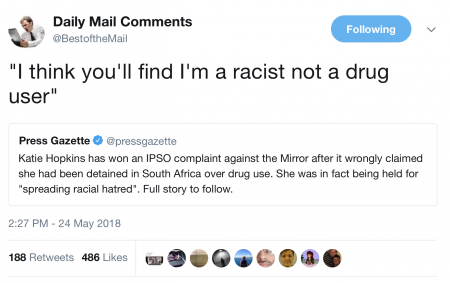 This is like the time I received an apology for someone saying I had a spot of urine on my trousers, when I’d merely explosively shat myself in a crowded theatre. https://t.co/mtqjFcRNwx

Sir, I wish to complain. You've stated that I missed work due to illness. I wish to make it clear that I was actually at home trying to wank off a dog corpse https://t.co/RbfjfzmalE

as self-owns go that is pretty special

Always in favour of accurate reporting. I hope the Mirror post their correction prominently

And we’re glad to report they didn’t disappoint.

This is the best thing the Mirror will ever do. Ever. pic.twitter.com/x7fpdncbPJ 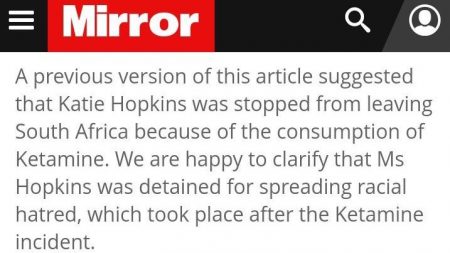 This used to be our favourite correction, from the Guardian 15 years ago.

We think we’ve got a new favourite.