Here’s something to ease your return to work after the Bank Holiday weekend, a very satisfying exchange of views on Twitter between the French and British ambassadors to the US.

This morning, I kicked off the @WhiteHouseHstry Symposium on the UK and Ireland in the White House. From Scottish stonemasons to English architects, the UK played an invaluable role in the design of this iconic building, and the diplomacy within it. pic.twitter.com/TGshIvuaA0

Cue French ambassador Gérard Araud who thought he spied an opportunity to make a point and have some fun at his fellow ambassador’s expense. 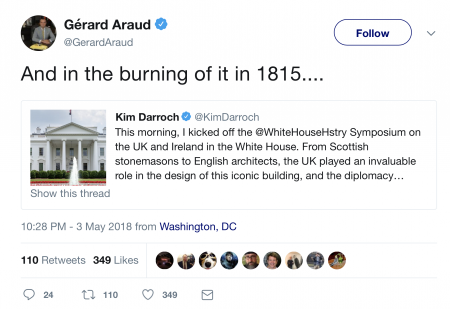 To which Darroch had the perfect response.

I was wondering who would be the first to say that. But Gerard, unusually, your history is a little inaccurate. It was 1814. Something else happened in 1815…

Wow . Throwing some Napoleonic smack.. some long memories at work there

Just in case you were wondering – Google, Google – the White House was burned down by British forces after the battle of Bladensbury in 1814 during the 1812 war which lasted until 1815, so you can see why he might have got mixed up.

Except the last word might go to this person.

Hang on… the architect was Irish.