A woman called Shelby Johnson turned to the internet for advice after she had this exchange with her boyfriend about her body. 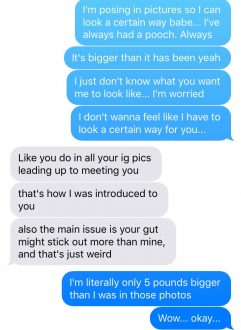 I am 120 pounds. I have been for about 5 months.
My partner said this to me. Am I overreacting for feeling hurt by this? I’m at a loss and just can’t even comprehend how someone who claims to love me can say this. pic.twitter.com/JpOrtkSZ4h

She also posted a picture of herself. 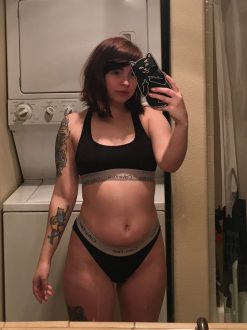 My journey of my body has been long. In highschool I was 80-90 and my doctors never figured out why I couldn’t keep on weight. At 20, I started gaining. When i did, I never felt happier and more healthy. I worked hard for this body. I am 120 pounds of pure growth. pic.twitter.com/vyLGUuT0fu

And here is a flavour of what people had to say in reply.

Dump him and buy a dog 🙂

girl you are SOOO effing beautiful okay. im so happy you are planning on leaving him because you deserve someone who will love you at any weight and always make you feel beautiful and loved. youll find a guy like that i promise, just gotta get through assholes like him💛💛

Break up with them now.

It’s only going to get worse. Five months is still the honeymoon phase. If it’s like this now, a year down the line is gonna be awful.

Me trying to find the “beer gut” pic.twitter.com/AMdeJhNG1h

And this is what happened next.

I have hundreds of messages so I’m gonna go through them tomorrow when I’m hydrated and have had sleep. Because I feel like death. Stress is fuckin whack on your body. Twitter is amazing! I love humans! Ya’ll are so kind and social media is so insanely awesome

I want to update you guys that we are broken up. He was really unhappy and felt like shit, especially after knowing my tweet went viral. He has told me he’ll use this as a learning experience to be a better person. And here I am, single and free 😇

This tweet going viral helped him see what a jerkoff he was to me. So in actuality I’m so glad this happened. Too little too late, but hopefully losing me helped him learn. pic.twitter.com/QoEpSdjvhT

Here’s what she had to say to people who replied saying she was only doing it to get attention. 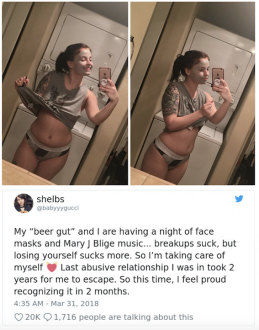