It’s exactly one year until Britain leaves the European Union (assuming it all goes to plan and hasn’t it gone swimmingly so far?)

The Daily Express is naturally very excited about it so did this with its front page today.

And everyone was making the same joke.

“And we shall illustrate this glorious moment with… a large cliff edge”. pic.twitter.com/H4opuZnun8

“Can’t think what to put this totally not batshit crazy Brexit quote on. What image doesn’t scream ‘isolated island’ and ‘real and imminent danger of death’?”

The Daily Express decided that a picture of a cliff edge would best illustrate #Brexit… pic.twitter.com/gdyHkUeNdn

I'm going to stick my neck out and say this won't age well for the Foreign Secretary. pic.twitter.com/KUlvXb99RS

The @Daily_Express illustrates #Brexit360 …with a cliff edge.
Yes, I know this is the White Cliffs Of Dover, but…#Brexitpic.twitter.com/IT00pol5D5

Today Daily Express is brutal;ly honest about #brexit, for once…. pic.twitter.com/BtkDbG09z5

The Daily Express is so excited it’s not even giving away any garden furniture. pic.twitter.com/LvJ3asrpNN

Oh, and there was even an entirely appropriate twist from the person who took the photo.

If anything sums up #Brexit – it’s the Daily Express making my pic of Britain look whiter than it actually is. pic.twitter.com/Jjsa05LYro 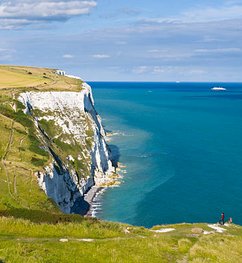 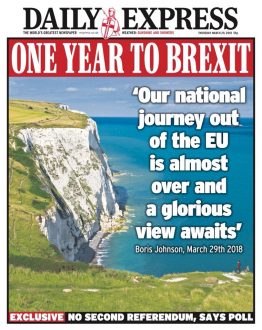 There was only one thing missing.