Stephen Hawking was a defining force in the world of science whose loss will be felt in every corner of the globe. I was sad that we didn’t agree on everything, but he was still a hero to me as one of our greatest ever thinkers – he inspired with his courage as well as his words.

Except Hawking was a passionate defender of the NHS, and almost as passionate a critic of Hunt who accused him of ‘pernicious falsehoods’.

Most pernicious falsehood from Stephen Hawking is idea govt wants US-style insurance system.Is it 2 much to ask him to look at evidence? 1/2

Now Hawking is no longer able to fend for himself, @JimMFelton on Twitter did it for him. 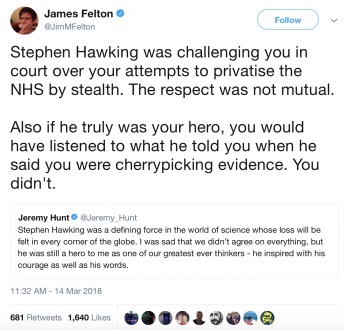 And he wasn’t the only person making the point.

He disagreed with you so vehemently he took you to court. If he was TRULY a hero to you & you'd had a shred of respect for him you wouldn't have argued with him. You'd have just listened to him & acknowledged this was a man who made a far more positive contribution than you can.

He thought You were a despicable man, a monstrous liar, a loathsome enemy of the people and the NHS's greatest threat, Jeremy – and he died whilst trying to prove it in the courts … but the universe is fully aware that he was spot on!

He was also suing you and was diametrically opposed to everything you stand for. Keep your empty words. Honour his memory by saving the NHS, without which we would not have had the pleasure of his company for so long.

You can honour his memory by not trashing the NHS. This faux-sympathy is nauseating.

Plenty of other people weighed in today, to remember Hawking’s efforts on behalf of the NHS – and to carry on the fight.

“The NHS is Britain’s finest public service and the cornerstone of our society. The NHS brings out the best in us. We cannot lose it.”

Not to be forgotten amid all the tributes to Stephen Hawking – his passionate defence of the NHS and his equally passionate views on the damage Brexit will do to science and to the country he loved.

Let's all take on his final battle. To save the NHS.

When Stephen Hawking bravely spoke out last year against what the Govt have done to the NHS, he did it for us and for future generations so its essential that his wise words are never forgotten. #RIP pic.twitter.com/0WwpaPELEt

The tribute that would have made Stephen Hawking most proud