A chap called Malboury Jones wasn’t overly happy when he moved into a new office and there was a hole in the wall.

Not only that, there was still a hole in the wall a few weeks later. So he did this.

We moved into new offices, but this wall has been left open for a few weeks now. I knew what I had to do. pic.twitter.com/kRQcqM4UDe 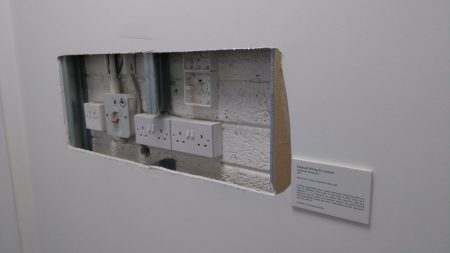 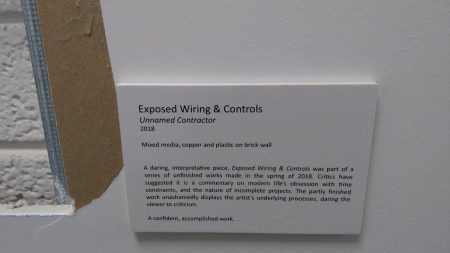 A daring interpretative piece, Exposed Wiring & Controls was part of a series of unfinished works made in the spring of 2018. Critics have suggested it is a commentary on modern life’s obsession with time constraints, and the nature of incomplete projects. The partly finished work unashamedly displays the artist’s underlying processes, daring the viewer to criticism.

Should be fun when the builder eventually turns up. Oh, look!

There was a development… pic.twitter.com/S8h1OrFasB 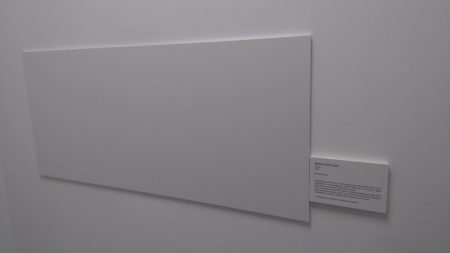 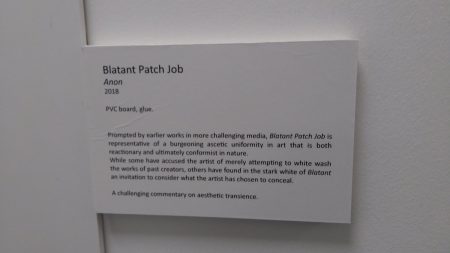 Prompted by earlier works in more challenging media, Blatant Patch Job is representative of a burgeoning ascetic uniformity in art that is both reactionary and ultimately conformist in nature.
While some have accused the artist of merely attempting to white wash the works of past creators, others have found in the start white of Blatant an invitation to consider what the artist has chosen to conceal.

A challenging commentary on aesthetic transcience

Well, I work for a printers, so it would have poor form to do otherwise 😀

And just in case you were considering something similar …

So that’s how these are done in museums, printed on foamboard? I want to make a lot of them.

Yup, just get a sheet of sticker paper or vinyl and foamboard, mount the printed sticker, then cut down afterwards for a clean finish. You can print directly to foamboard also, but you need a specific machine for it.

And it got people thinking.

My only trip to SFMOMA years ago I saw some rusty metal leaning up against a wall and I thought, “Did some workers leave this?” but then saw a little art sign like you made. I just thought, “Oh, it’s Art” but now I wonder if I wasn’t right all along!

When the new SFMOMA expansion opened a couple years ago some teens did a similar prank that went viral. https://t.co/01kUJnimMy

LMAO WE PUT GLASSES ON THE FLOOR AT AN ART GALLERY AND… pic.twitter.com/7TYoHPtjP8