Katie Hopkins posted a picture on Twitter of her receiving medical treatment in South Africa when she collapsed after taking ketamine.

Grateful thanks to the South African emergency services for putting me back together. Leaving it all on the road, to tell the truths not being told. *ketamine 1 / Hopkins 0) pic.twitter.com/NHTjBsrd3v

Turns out it was rather more complicated than you might think – she was given the drug by an ambulance crew after she dislocated her shoulder.

We wonder if there’s a lesson she can learn from this maybe? Here’s what people made of it on Twitter. 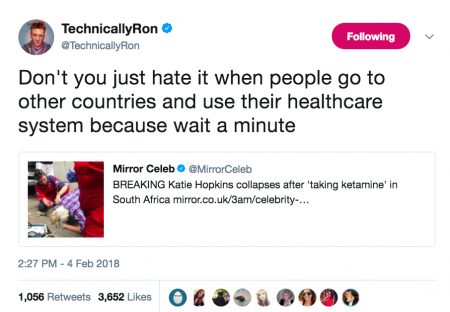 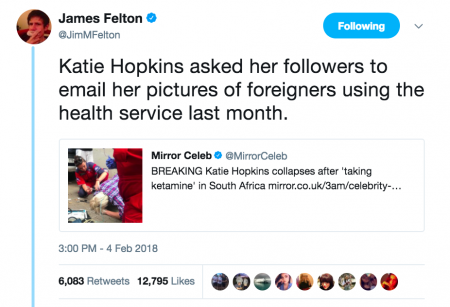 Imagine if an outspoken foreigner came to Britain, criticised the country repeatedly & within a fortnight accessed the NHS (for taking drugs, no less). What would Hopkins have to say about that?https://t.co/gi7Zqokr86

After I'd heard Katie Hopkins had collapsed on Ketamine, I thought I'd check the effects of going into a K-Hole. After which I'm not entirely sure how she knew anything different was going on. pic.twitter.com/ujqKXfHYSX 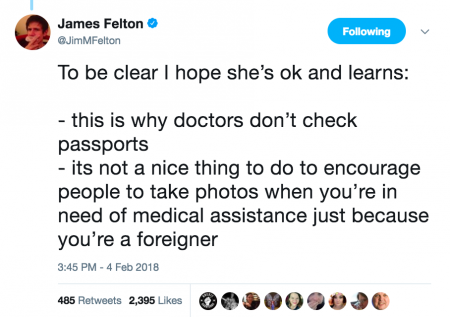 Anyway, it looks like Hopkins is fighting fit again as she posted this just a few hours later. 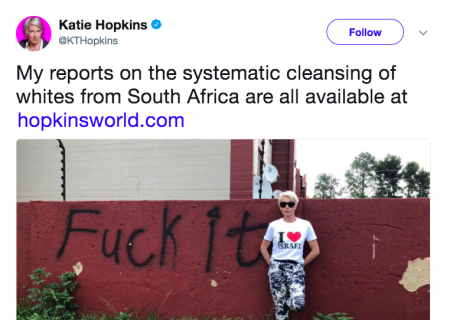 I'm unclear.
Did Katie Hopkins take ketamine willingly, or did local park rangers use it to bring her down?

Thank you David. I suffered a dislocated shoulder – and received ketamine from the ambulance crew. A bill for emergency & healthcare services paid gratefully and in full. https://t.co/ACn9FZ08iE