Piers Morgan’s not happy with this picture of him and Donald Trump. Please do not share

Piers Morgan is browned off with the BBC after it mocked up this picture of his interview with Donald Trump. 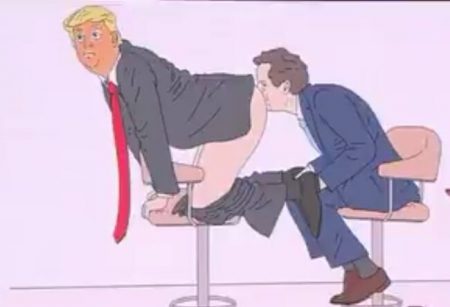 Subtle? No. Accurate? Well, we can see where it’s coming from, certainly.

But Morgan didn’t see the funny side.

The BBC thinks this is OK to broadcast. But if it depicted high profile women, there would be outrage.
Why the double standard? pic.twitter.com/xcdxpEJD3E

In fact, he was so angry he kept retweeting it.

If Trump tweeted an image like this depicting Hillary Clinton & a female interviewer, all those currently celebrating/retweeting it would erupt with outraged cries of 'Sexist!' 'Misogynist!' 'Homophobic!' – led by the BBC.
Liberal hypocrisy in all its unedifying glory! pic.twitter.com/ejd71nqqJP

So we can't have #gridgirls or #walkongirls because the imagery is 'demeaning'.
But the publicly-funded BBC can broadcast this about 2 men?
Any comment, @Ofcom? pic.twitter.com/ErOtK8Lvh6

If the BBC broadcast an image like this after a female journalist interviewed @theresa_may – all hell would break loose & people would be fired. Gender equality shouldn't just apply to pay – should it? pic.twitter.com/9xNqGPjZl9

Very possibly he was only making it worse by continually tweeting it to his millions of followers, considerably more than watched it on BBC2.

But sympathy for the former Daily Mirror and News of the World editor wasn’t exactly overwhelming.

Piers Morgan is outraged at a satirical cartoon depicting a metaphor, but he’s fine with Donald Trump claiming “to grab women by the pussy.” That’s what makes the metaphor apt. And funny. https://t.co/Hvw3v9DGJB

Bless you for trying.
Classic tabloid move. False equivalency. There is no current equivalent to this. You, a millionaire, middle-aged white man spent twenty minutes fluffing a foolish, racist billionaire on international television. We are laughing at you. Specifically at you.

U shouldn’t have eaten his ass bro https://t.co/anOw3JAOlm

This is a hilarious thing for @piersmorgan to tweet out. I love his commitment to making sure as many people as possible see others making fun of him. https://t.co/IjA1PPxEG3

Here’s the skit in full, on BBC2’s The Mash Report.

So if it was a famous female politician & female interviewer, you’d be fine with it? If not, you’re as two-faced as the BBC. https://t.co/U1Kz06plgw

Sure, but if was two famous women being depicted that way you would be screaming blue murder about it. https://t.co/Aktgzdj0Uc

Morgan reckoned it was homophobic but we’re not so sure.

It's not homiphobic; it's a depiction of your utter sycophancy.
Trying to use the homophobia angle is s cheap shot which is typical of you. https://t.co/EeFlN4JhVF

It portrays two straight men in a homosexual act so yes, it’s homophobic – not that you can even spell the word. https://t.co/EqWdv0NfL9

Hmmm, analingus is not an exclusively gay sex act. It's something anyone can do, to anyone else. Indeed, in early modern demonology it was allegedly performed by women on the Devil's arse, and was known as Osculum Infame (the kiss of shame). https://t.co/diTFxRb870

What did you think? Tell us in the comments on social media.

If you’re thinking about watching the 6 Nations, this should liven things up a bit