Of all the people the organisers of ‘An evening with Chevy Chase’ could have chosen to interview the National Lampoons and Saturday Night Live star, they chose … Mike Read. 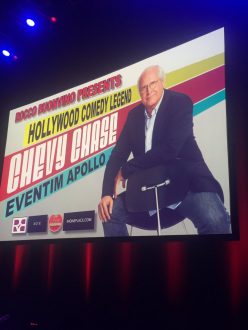 And it went just as well as you’d expect, according to people who went to Saturday night’s gig at the Hammersmith Apollo. So bad, in fact, that we kind of wish we’d gone.

Here’s the bit when an audience member shouted, well, see for yourself.

Total chaos tonight. One audience member shouted "Mike Read you're a twat!" He wasn't too happy with @MikeReadUK's pretty random and off point questions for Chevy Chase tonight. pic.twitter.com/JWrN8Qu1cB

But there’s more than that. So much more…

I am watching Chevy Chase being interviewed on stage by former Radio 1 DJ Mike Read, and it’s going about as well as you might expect.

#chevychase being interviewed by Mike Read was absolutely awful. I fucking loved it. pic.twitter.com/BRozj7k04Q

Read is a) doing an impression of a man who skim-read Chevy’s IMDb page before going on stage and b) going full Partridge. It’s incredible.

Chevy Chase in London interviewed by Mike Read was a fuckin car crash. Mike read got heckled off. This is the best gig I've ever been to. pic.twitter.com/BDuKCjpvoS

Mike Read genuinely pulled out an acoustic guitar and made Chevy Chase sing a song from 35 years ago nobody remembered.

Mike Read goes full Partridge and plays his guitar AT #chevychase who understandably didn't remember lyrics from 34 years ago – #freelovefreeway by #DavidBrent couldn't have been far behind pic.twitter.com/xN7wdSDVuk

If you weren’t at the Chevy Chase gig tonight with Mike Read, this pic pretty much sums it up… pic.twitter.com/pbXXom2cMn

He tried getting CC to sign the words to a scene from the Three Amigos which CC didn’t remember and wasn’t keen to sign … but Reid continued anyway !

Mike Read couldn’t remember the name of Spies Like Us (just ‘Spies’), but did reel off a string of Chevy Chase’s distant relatives.

Very early on someone should have stood up and said to Read, You’re not doing the questions.

Every single person in the room knew more about the subject than that lead-swinging slacker.

I also enjoyed it when Actual Mike Read (a dead raven preserved in lacquer and buried in felt) asked Chevy about some of his famous catchphrases and a guy in the audience shouted, “Mike Read, you are a twat”. #ChevyChase

My favourite, a classic Partridge moment –
Mike: So you like soccer?
Chevy: Yeah.
Mike: Is that English soccer?
Audience member: Mike Read, you're a twat! https://t.co/UmnJpZPCyr

Best part of the #ChevyChase event was when Actual Mike Read (!), out of nowhere, with utmost seriousness, and in a line of questioning otherwise unexplored up ‘til this point, randomly asked Chevy for his thoughts about all the kids on drugs these days. #AccidentalPartridge

#Chevychase walks off stage dropping the Mic after Mike (Read) dropped the show and walked off – Chevy was amazing but it was an uphill struggle he had no choice but to give up – @FrazerBrown we'll #jointhechevoloution if you bring him back to UK pic.twitter.com/v02Z7eWnnt

When Mike Read got out his guitar at Chevy Chase tonight pic.twitter.com/E57PSFpAOL

In 40 years time, people will be claiming that they were there to see Mike Read interview Chevy Chase, in the same way that people today claim to have been at that Sex Pistols gig in 1976 …

And this guy hated it so much he did a whole thread about it.

Stunning evening watching Chevy Chase 'interviewed' by Mike Read. Literally stunning, as in being bludgeoned until you're numb to feelings.

This terrible photo retouching has to be seen to be believed