Donald Trump has cancelled his planned visit to the UK to open the new US embassy next month, disappointing placard manufacturers up and down the country.

But it wasn’t because he didn’t want to be shouted at by thousands of people in an unprecedented protest against the so-called president. Oh no.

Reason I canceled my trip to London is that I am not a big fan of the Obama Administration having sold perhaps the best located and finest embassy in London for “peanuts,” only to build a new one in an off location for 1.2 billion dollars. Bad deal. Wanted me to cut ribbon-NO!

That acrid burning you can smell is Donald’s pants. Here are our favourite responses online and there really is so much to enjoy about this. 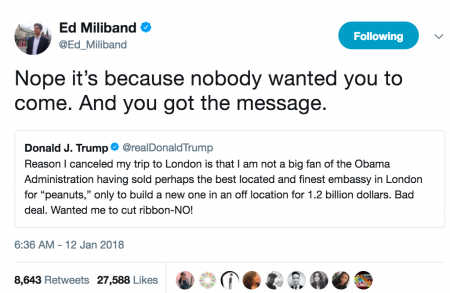 So the US Embassy ‘deal’ was instigated by George W Bush, whose administration secured the Battersea site, & the Grosvenor Square freehold was never theirs to sell. Trump’s nonsense seems to have infected almost every level of the British media.

Very clever sir! Cancelling the trip, rather than admitting you're scared-silly at the prospect of facing massive protests you'd inevitably encounter upon your arrival, was a masterstroke! UK is just another shit-hole country, right? #MakeAmericaCringeAgain https://t.co/Kk3h1zmVsJ 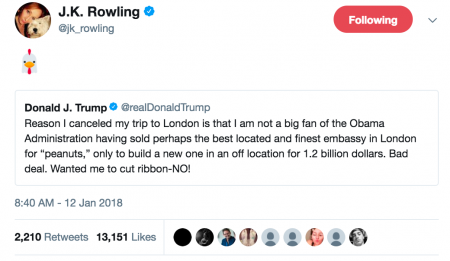 As my train passes it this morning, I shall wave at the new "off location" US Embassy (commissioned by … Bush!) safe in the knowledge that it shall not be welcoming the cheeto-faced shit-gibbon after all. Hurrah!

Many Londoners have made it clear that Donald Trump is not welcome here while he is pursuing such a divisive agenda. It seems he’s finally got that message. This reinforces what a mistake it was for Theresa May to rush and extend an invitation of a state visit in the first place. pic.twitter.com/lNaQGx9iBw

The US didn’t own the embassy, they rented it from the Duke of Westminster for one golden peppercorn a year https://t.co/aMBrSOVlY7

Trump would rather twitter fight North Korea than face me again on Scottish soil – I still have this sign and am prepared to whap it out again #TrumpVisit pic.twitter.com/B2fCBYoTvO

There’s only one reason Donald’s not coming. They’d hear the booing in space. 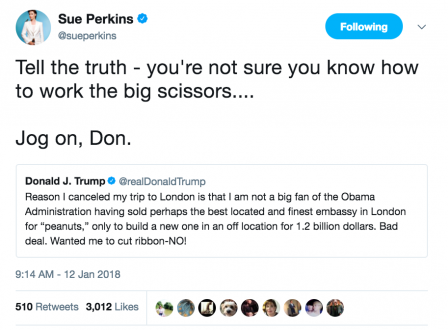 @IanDunt It's the real fans I feel sorry for #Trump #TrumpVisit pic.twitter.com/Ur6ZrPcvZs