You might have seen that Donald Trump’s not entirely happy with the book Michael Wolff has written about him, and here’s what the so-called president tweeted a few hours ago.

Michael Wolff is a total loser who made up stories in order to sell this really boring and untruthful book. He used Sloppy Steve Bannon, who cried when he got fired and begged for his job. Now Sloppy Steve has been dumped like a dog by almost everyone. Too bad! https://t.co/mEeUhk5ZV9

And in case you’re wondering, it linked to this.

The reviews are in… pic.twitter.com/UNdkNbBEFF

Now there were lots of responses to this but no-one did it better than Luke Skywalker himself. 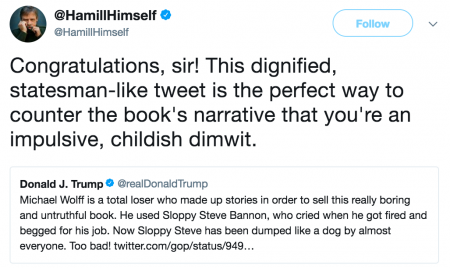 The force is strong with that one.

Here’s what a few other people had to say.

Every time you tweet something immature and stupid like this is it really lends credence to his book.

He’s totally reinforcing the characterisations in the book.

Dear @realDonaldTrump this tweet reinforces the gist of the book that is you are childish and impulsive.

Are you trying to get #SloppySteve to feel really good about testifying against you.

‘Wow, this extract from Wolff’s book is a shocking insight into Trump’s mind’