Poundland is really getting into the Christmas spirit, if its Twitter feed is anything to go by. It must be, like, two bottles in by now at least.

It was the teabagging one that really got people’s attention. 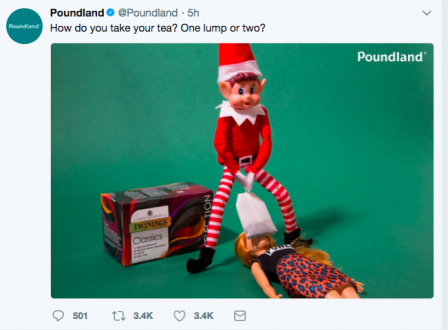 People were divided about it online but one lot who weren’t happy with it were Twinings (whose teabags were featured in the picture).

We are aware of an image that is circulating that misuses our product. This is to confirm that we had no involvement in this and that it is obviously not reflective of our brand values.

So the tweet was deleted by Poundland and then magically reappeared again, with one important difference.

Twinings weren’t the only ones who weren’t impressed.

has @Poundland been hacked….. their recent adverts on here have been in rather poor taste……

Hi Mark. The Poundland account has not been hacked. I am sorry that you feel this way and will share your feedback. Thanks, Zoe

Who on earth signed that off?! Nothing says ‘seasons greetings’ like a teabagging elf 😂

Are the ‘lumps’ referring to his balls? How many balls does dolly want in her face? These are children’s toys.

I really enjoy your store and that you’ve thought outside the box but this is not festive or tasteful.

Then someone asked these guys to get involved.

@GreggsOfficial please show @Poundland how this stuff is done.

It’s not the first of its type to appear on the company’s Twitter feed in the last few days. Just the first to feature a teabag.

Buzz off Darth, my lightsaber is bigger than yours pic.twitter.com/ygxZgSo3MJ

That’s one way to scratch that itch. That’s not Santa’s toothbrush is it?! pic.twitter.com/bzgX3LFEDA

This one could run and run.

Are you doing any scat related ads for Chocolate Buttons?

It’s a whole campaign, seen some others… pic.twitter.com/zhYEovG8RV

When you’re having your review of whether this was a good idea or not in January, please show them this Tweet. I’ve never even been in a Poundland before, but now I’m going to go and spend money at one.

I just came here to read the comments. pic.twitter.com/NJLT29QlRd

You pays your pound, you takes your chances. Your thoughts please!

Possibly Poundland won’t be too upset by the fuss. Probably shouldn’t have put that Twinings box in the picture though.

Create offensive viral Twitter campaign > Defend it as a sense of humour thing > Wait for articles covering TWITTER OUTRGE AT OFFENSIVE CAMPAIGN > Watch as this story reaches the top of the most read charts > Enjoy several £100k of free media coverage for your brand!