Piers Morgan took to Twitter to have a right old go at Olly Murs after he got over-excited during the terror scare non-event in London on Friday.

Murs was tweeting this sort of thing.

Fuck everyone get out of @Selfridges now gun shots!! I’m inside

And Morgan responded with this sort of thing, prompting a lively debate between the pair.

Listen piers! I was shopping and then all of sudden the whole place went mad, I mean crazy people running & screaming towards exits. We found a small office to hide to which loads of staff and people were saying there was shots fired. If you was there you’d have understood mate. https://t.co/mnZBTSLod4

No. You listen, Olly. When you have millions of followers be very careful what you tweet. There were no shots, in fact nothing happened at all. So you stirred extra needless panic by tweeting false information. https://t.co/6L3xTBlwuA 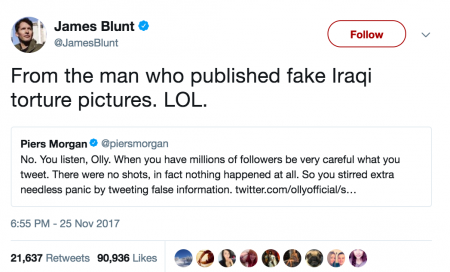 And people loved him for it.

Defended the country. Prevented WW3. Brilliant musician, Star in a Reasonably Priced Car. Rinsing the human cockwomble that is Piers Morgan. Is there nothing this man can’t do….? 😂😂😂

If there weren’t shots fired last night, there have been now😲

Here’s what Morgan had to say in return and it wasn’t his best effort, frankly. 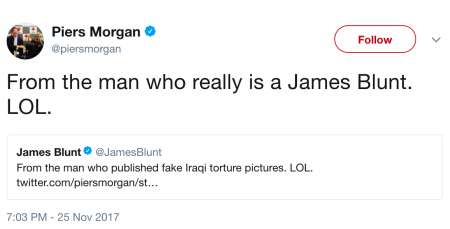 Then it started to get a bit desperate.

Perhaps, but I have five times as many followers as him & can sing twice as well. So it’s all relative. https://t.co/BEmwwUHiSu