These responses to Piers Morgan are very satisfying indeed

Pier Morgan was moved to defend himself on Twitter after someone asked him this.

How does @piersmorgan not get punched, multiple times, daily?

Here’s what the Good Morning Britain man had to say. 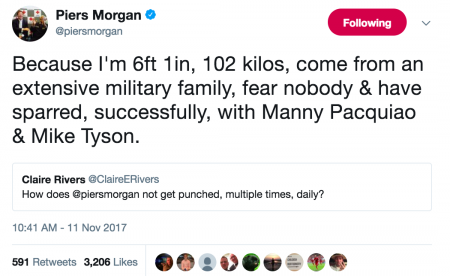 And here’s how the rest of the world responded.

BMI of 30 puts you in the overweight category pic.twitter.com/9MmdwKtA0T

“6ft 1in ? I didn’t know they stacked shit that high” pic.twitter.com/y4prdNUWxs

At Disneyland, my 4 year old son fought, and defeated, Darth Vader. He was so proud of himself…That’s you, that is.

How come @JeremyClarkson filled you in then?

So because someone in your family has served in the military, that makes you Muhammad ‘I’m hard’ Bruce Lee then?