The responses to Nigel Farage are everything you’d hope for

Nigel Farage is back doing what he does best – talking balls on Twitter.

Responding to the Vatican’s decision to ban the sale of cigarettes on advice from the World Health Organisation, Farage had this to say. 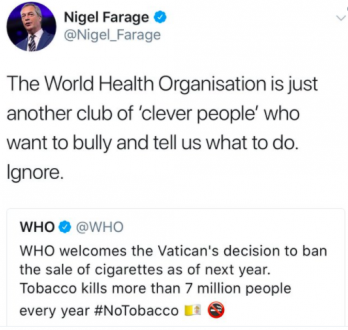 And this is what everyone else had to say in response.

Expert warns that smoking will kill you. Farage would rather die than listen to expert. We have gone peak Brexit. pic.twitter.com/LTsuXjn5uz

You should stick some Asbestos up your cock, that’ll show those do gooders.

Pilots are just another club of ‘clever people’ who want to bully and tell us what to do. Ignore. pic.twitter.com/nSR4qyvUeB

1. WHO is not banning it is the Vatican. You want the right to smoke fags in church?
2. WHO not a club but a world wide organisation of experts.
3. The term ‘clever people’ is only a pejorative if you are fearfully stupid.
4. You are a shit stirring cunt.

Never trust a man who thinks "clever" is an insult. https://t.co/QK778zTkzV

Those bloody experts at the World Health Organisation, coming over here, improving our health and helping to save people's lives… https://t.co/VL0ZhNRLi7

The WHO have eradicated polio, helped eradicate smallpox and actively work in war zones to help injured people. You have… a crap show on a regional radio station and the face of a melted waxwork.

But please, do us all a favour and smoke yourself into oblivion.

This is where the rot started: the ridiculous myth that “clever people” are stupid. Nigel, you’re a cockcloth. https://t.co/xB3UZHflY7

THEY’LL BE TELLING US THE MOON CONTROLS THE TIDES NEXT. MIND CONTROL.

The WHO also said you shouldn’t take your toaster into the bath. Just ignore them Nige

“Don’t do that, you’ll literally die”
“BLOODY LIBERAL ELITE TELLING ME WHAT TO DO”
“From cancer, here are the stats”
“INTELLECTUAL BULLIES, SICK OF EXPERTS”

Nigel Farage is encouraging his followers to smoke. Fantastic. Go for it lads. 200 a day. Ignore the hacking cough you develop. Up it to 400. The doctors don't know anything. 600. That tightness in your chest is comforting. Stick it to the establishment. Go into the light.

And then there’s this guy who thinks Farage is being wilfully misinterpreted.

Should be left to peoples freedom of choice. In the end we will all die of something. Personally I have never smoked, but I like a pint 🍺 or two. Alcohol kills more people than cigs! Stop removing people’s freedom of choice!!!

That’s great Jason. Except the WHO aren’t banning anything are they. They’re simply advising that it’s bad for your health

I think you have missed the part about the Vatican.

No I haven’t Jason. The Vatican have banned smoking. Nigel is bitching about the WHO, who haven’t banned anything. Happy to help 👍

If that is how you want to perceive the tweet, you are free to do so my friend.

Erm, that’s pretty much what those words mean.