It’s 30 years since the late Paul Daniels’ most infamous trick on Halloween night 1987 when he faked his own death on live TV.

Attempting to escape from a metal box lined with metal spikes – the so-called Iron Maiden – the door appeared to slam shut on Daniels with the magician still inside.

The lights went down, the credits rolled, and a sombre voice asked the studio audience to leave the building, not the sort of thing the BBC would probably consider doing today.

I remember seeing it at the time and it still gives me the willies watching it today.

Here it is again, this time with Daniels at the end of it, and the introduction to the programme that followed.

Daniels was fine, of course, but the stunt did not go off without a hitch after a reported 1,100 people rang the BBC to see if he was okay.

Such was the uproar that the magician felt compelled to defend himself in this extraordinary letter to the Times. 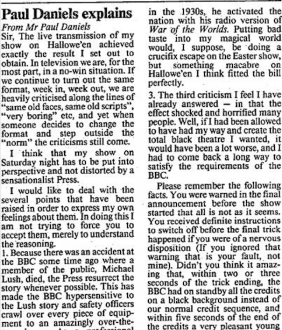 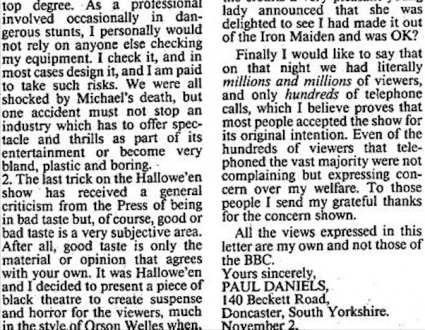 Here’s what Daniels, who died last year, said about it later.

@brianftang Yes. I was asked to create an uproar by the producer so I invented that illusion.

He certainly did that. Here’s 5 more classic Daniels moments which you’ll like. Not a lot, but you’ll like them.

Judging by these mistakes, Stranger Things 2 got the 1980’s massively wrong

Lest we forget how Tesco chose to mark Remembrance Sunday