If only we shared this person’s courage of their convictions.

They’re totally wrong, obviously, but we’d love to believe in ourselves as much as this person does in this exchange shared by @luxlazuli on Twitter. 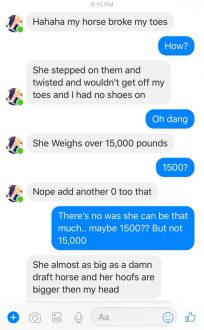 It’s around this point it REALLY takes off. 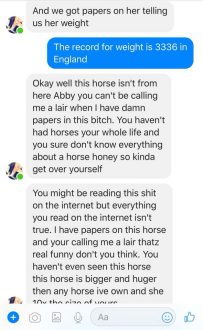 Let’s look at the evidence.

Bigger than a bull African Elephant, maybe she’s confused about species. I saw someone confuse a tiger with a lion at the zoo once. pic.twitter.com/x0LdbmdvMZ

I got my giant horse out of prison pic.twitter.com/Bk3aKviisy

A 7 ton horse walks into a bar. Bartender says why the long face? Also you’re huge

I believe this horse exists

her horse is really ten horses in a giant trench coat

15,000 lbs? Someone about to be invaded… pic.twitter.com/MDQ5kEkyLr

Who walks barefoot next to their horse elephant

For some reason, her use of "lair" concerns me more than her 7-ton horse