Kern’s Corner: One for the dream hunks

Despite looking like a buff dream hunk I’m actually a very unhealthy man. I don’t eat right. I don’t exercise properly. My lifestyle’s so bad that every now and then I expect some oompa loompas to jump out and sing a moralising song about what a dick I am:

Some people are amused by this but it’s not funny. My diet is awful.

I eat like every day I’m at an eight year old’s birthday party. Just constant crap guzzled down. Penguin biscuits, hula-hoops, party rings. I remember once I put an individual satsuma segment onto a digestive biscuit and in my head that was a “real” dessert – whatever that means.

What I love more than anything though is Chinese takeaway. I love Chinese food so much that the other day I thought to myself: “I hope the people who run my Chinese takeaway die before me – cos at least then when I get to heaven I’ll be able to have my favourite food.”

I just only hope that Mr and Mrs Chang’s idea of heaven is continuing to run a Chinese takeaway.

I’ve been told that the Chinese are hard workers so I imagine that’s possible.

And it’s a good business idea cos who’s going to want to cook on their first night in heaven? Probably better to order something in.

The sum result of all this is that I’ve now got a belly.

Actually that’s bollocks – I’ve had a belly for ages. 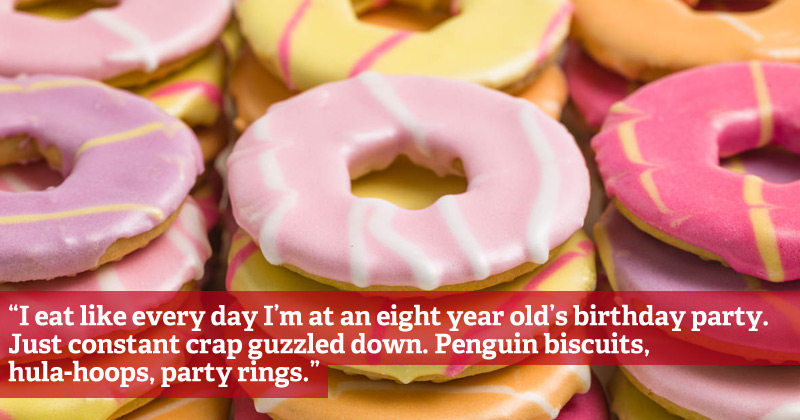 The other day I had to push my belly neatly to one side so I could do some stretching before exercise.

Exercise is nonsense but we’ve all got to go through the motions and do it and act like we wouldn’t rather be mainlining Haribo.

I go to the gym though and there seems to be no-one in the middle like me. No one who’s not great but who isn’t unbelievably shit either.

There are either huge Polish guys who look like their mothers gave birth to them whilst bench-pressing 400 kilos.

Or else there are tiny old Indian ladies wearing pink velour tracksuits with matching caps, walking very slowly on a treadmill whilst holding bottles of water. Little old ladies walking so slowly that you’d burn off more calories in a fart.

For a short while I tried an exercise regime that took minimal time but was like your heart being raped by a rhinocerous’ horn.

You basically had to do four minutes of the following:
– Ten burpees
– Then forty mountain-climbers
– Then ten jump squats
– And then repeat until either the four minutes were up or you died

It’s the most horrible thing I’ve ever done to myself but what was beautiful was that nothing that happened for the rest of the day could possibly be worse. Every degradation, humiliation, failure or piece of abuse you received thereafter was like an act of kindness.

I stopped doing it though.

And also I’ve realised I’m quite happy to die without having ever seen my abs.

There’s no point going overboard down here on earth.

Not when in heaven the Chinese takeaway is always perfect and the prawn crackers help you get a six-pack.

LEE KERN
Lee is a writer and comedian.