When Jeremy Hunt said Stephen Hawking got his science wrong

One to be filed under brave/stupid/bell end.

Hawking – A Brief History of Time and all that – said the government was trying to privatise the health service when all evidence suggested they should take it in the opposite direction.

Stephen Hawking is brilliant physicist but wrong on lack of evidence 4 weekend effect.2015 Fremantle study most comprehensive ever 1/2

And whatever entrenched opposition,no responsible health sec could ignore it if you want NHS 2 be safest health service in world as I do 2/2

Still on Twitter, @DavidSchneider summed it up to perfection.

Jeremy Hunt: "Stephen Hawking is brilliant at his only job which is to analyse evidence but he's not brilliant at analysing evidence" pic.twitter.com/bxZReZPhwq

Here’s the excerpt of the Guardian story Schneider is referring to. 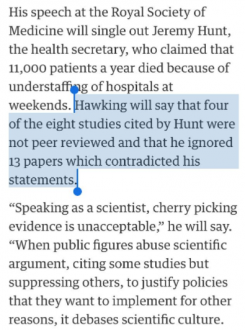 Stephen Hawkings book, “a brief history of times when Jeremy Hunt was wrong” is well worth a read.