Confirming everything you ever thought about them, an estate agent has reacted to the escalating North Korea crisis by issuing a guide to househunters looking to buy a home outside a nuclear impact zone.

“With tensions between the US and North Korea escalating the latest release by eMoov.co.uk has highlighted some options for homebuyers that should (hopefully) keep them clear of any nuclear impact from World War Three.

“A backyard nuclear bunker can be a cool edition to a property, but can also be a pain to construct so rather than hide away, homeowners can look to radiation free pockets of the nation to save themselves the trouble.”

There’s even a handy map. 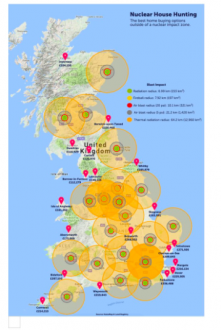 This is starting to feel a bit misguided.

“Although we’re out of range from any threat from North Korea, London would be the obvious choice for a nuclear strike in the UK but the capital could be the tip of the iceberg, so eMoov used Nukemap to plot the resulting impact zones for an all-out nuclear attack on 20 major UK cities.”

The press release was sent to a journalist at the Times who shared it on Twitter.

Wait until you read the quotes from the estate agent’s chief executive.

A disturbing amount of research seems to have gone into this

I think they had too much time to play with the nuclear blast app/website and then had a (not so) bright idea.

I don’t want to live in a world that only has Ullapool in it.

Haven’t they seen ‘Threads’? If you move to Bakewell you’ll have a bunch of irradiated Doncastrians turn up at the front door.

Nothing says “Why not take on a 30 year mortgage?” like the threat of imminent nuclear war.

@eMoov Quick question: In the event of nuclear fallout, will estate agents mutate into human beings?