Either Donald Trump didn’t realise Japan’s First Lady could speak English, or she totally owned him

So there’s a theory that the Japanese prime minister Shinzo Abe’s wife pretended not to speak English for nearly two hours so she could avoid talking to Donald Trump.

How did this theory come about?

First, here’s Trump talking about a dinner with fellow world leaders and their partners at the G20 summit, in an interview with the New York Times. 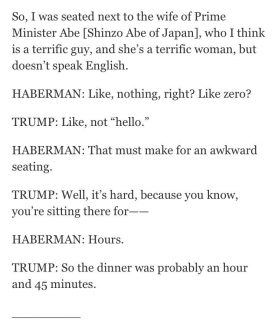 So either Trump didn’t realise, or she pretended not to be able to speak English so she didn’t have to talk to him for the best part of two hours.

Looks like the First Lady of Japan pretended not to speak English for nearly 2 hrs to avoid talking to Trump https://t.co/ee9LGHVlDo

Perhaps she was worried he was going to shake her hand.

Or maybe something was lost in translation.