Doctor Who: Sun and Daily Mail respond to first woman Doctor in only way they know – naked pictures of Jodie Whittaker

The first woman Doctor in 54 years of Doctor Who and The Sun responded in the only way it knows how – with topless (and bottomless) pictures of its new star, Jodie Whittaker.

“DALEKTABLE” was its headline across pages 4 and 5 of today’s paper. Geddit?

“New Doctor Who star Jodie Whittaker has a saucy screen past, a trip back in time reveals. The show’s 13th Time Lord has strpped off more than once for her roles.”

Phowar!!! We’ve used the first thing that came to hand to hide her modesty. 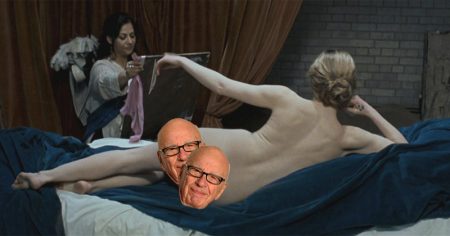 [the sun]
INTERN: the new dr who is a woman
EDITOR: print a photo of her tits
INTERN: but shouldn't we
EDITOR: TITS
INTERN: [nodding] tits

Presumably the Sun also looked for pictures of Peter Capaldi’s dick the last time the Doctor was cast.

Even a Sun reader was taken aback.

Not to be outdone, the Daily Mail did exactly the same thing. 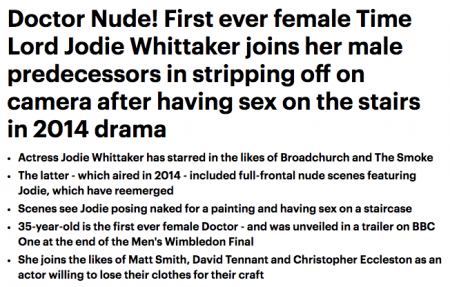 It prompted a similar response from (some) readers.

The Sun today publishes pictures of the new Doctor Who's breasts. I'm not sure things have shifted on their axis all that much, after all.

Fed up with people telling you that Doctor Who is being run by PC lefties? Try sharing this.

"Doctor Who is being run by PC lefties now"

In 1963, it had a woman producer and was directed by a gay Asian man. #doctor13 #DoctorWho

Jodie Whittaker takes over the Tardis – our favourite 20 responses online

A quick guide to the Great Houses in Game Of Thrones