New York Times columnist David Brooks went viral, although presumably not necessarily for the reasons he would have wanted, with an article headlined “How We Are Ruining America”.

It was this bit that got everyone’s goat, and you can see why. 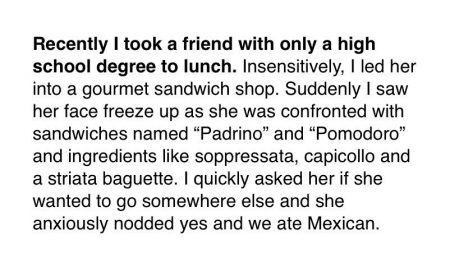 Don’t recognise those meats? Don’t worry, you are not alone.

I HAVE A MASTERS DEGREE AND I DO NOT KNOW THESE ITALIAN MEATS DAVID BROOKS SPEAKS OF.

DAVID BROOKS: [to no one] THIS IS NORMAL. HE IS ASKING IF WE WOULD LIKE PEPPER, A SPICE, ON OUR FOOD

The problem isn't David Brooks' point about classes. It's that he thinks people without college degrees are scared of fancy sandwich names.

Someone should tell David Brooks that having a college degree doesn't preclude you from disliking pretentious hipster eateries.

No fucking wonder everyone bails on plans with David Brooks pic.twitter.com/6OuqCoZ5mn

I have a PhD and no clue what that stuff is. This person probably seemed anxious to flee because she was stuck having lunch w/David Brooks. https://t.co/1eyNJeiXck

And then came the best bit. The parodies.

I don't know why everybody's going so nuts; I think David Brooks made some good points. pic.twitter.com/lRC6zj7TOH

"I took a friend who'd only gotten one doctorate to a wurst house. She pronounced Sauerkraut wrong. So spat in her hair." David Brooks.

Just imagine what his lunch guest made of the whole thing.

Just had a good Mexican lunch with my old friend David Brooks. Now to take a big sip of coffee and log into twitter

to the woman david brooks had lunch with, my email is [email protected] and i'd love to talk whenever

If you only read one tweet (too late, we know).