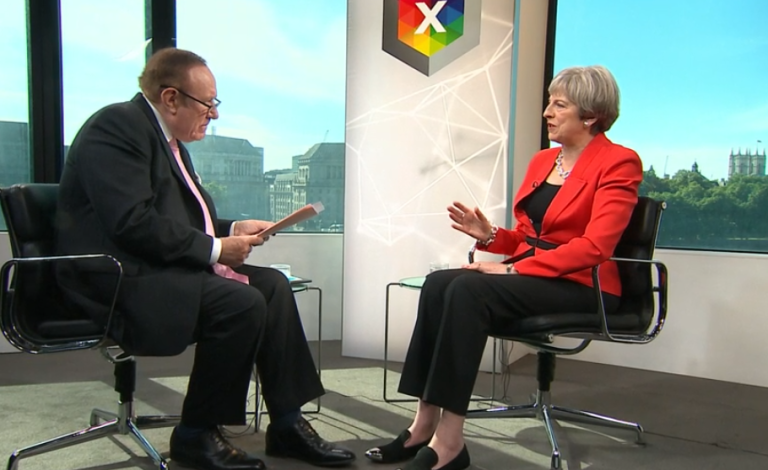 Oh Poke readers, we actually watched this interview and were delighted to see the BBC giving Theresa May a good grilling for once.

She came across as defensive, unsure, and nervous – hardly the “strong and stable” woman of the publicity machines.

And of course the Twitter comments were good so here’s 11 of the best.

May is really just a stream of repeated stuttering cliches badly Pritt-Sticked together and stuffed in a red blazer, isn't she? #BBCElection

I feel sorry for Andrew Neil. Interviewing Theresa May is like interviewing the Speaking Clock but rather less informative. #BBCelection

I have never seen a PM flanneling around as badly as May on @afneil. How on earth will she cope with Brexit negotiations?

Theresa May is answering Andrew Neil's questions like an employee who is having a terrible appraisal from their boss.#GE2017 #AndrewNeil

May says Corbyn is 'trying to sneak into no. 10.' Mate, he's leading the opposition in an election YOU CALLED. Hardly surreptitious is it?

If you say "Strong and Stable" three times into a mirror then Theresa May will appear and close your local A&E. #BBCElection #AndrewNeil

If this is what Andrew Neil can reduce Theresa May to imagine what the EU will do. What an absolute shambles #bbcelection

AN: "would you like a tea or coffee?" May: "well there's only one drink that matters, and it's a choice between me and Corbyn" #BBCElection

What a terrible day for @theresa_may.

No wonder they have tried to keep her hidden.

Weak and wobbly, for sure. #BBCElection

And as Andrew Neil himself said “It’s the first time in history a party’s broken manifesto pledge before election.”

And finally as @Joncstone points out “This Theresa May interview is absolutely surreal when you read a transcript of it. She seems physically incapable of answering a question.”

next story
Breaking News: Piers Morgan and Rudy Guiliani taking chunks out of each other on GMB is quite the watch