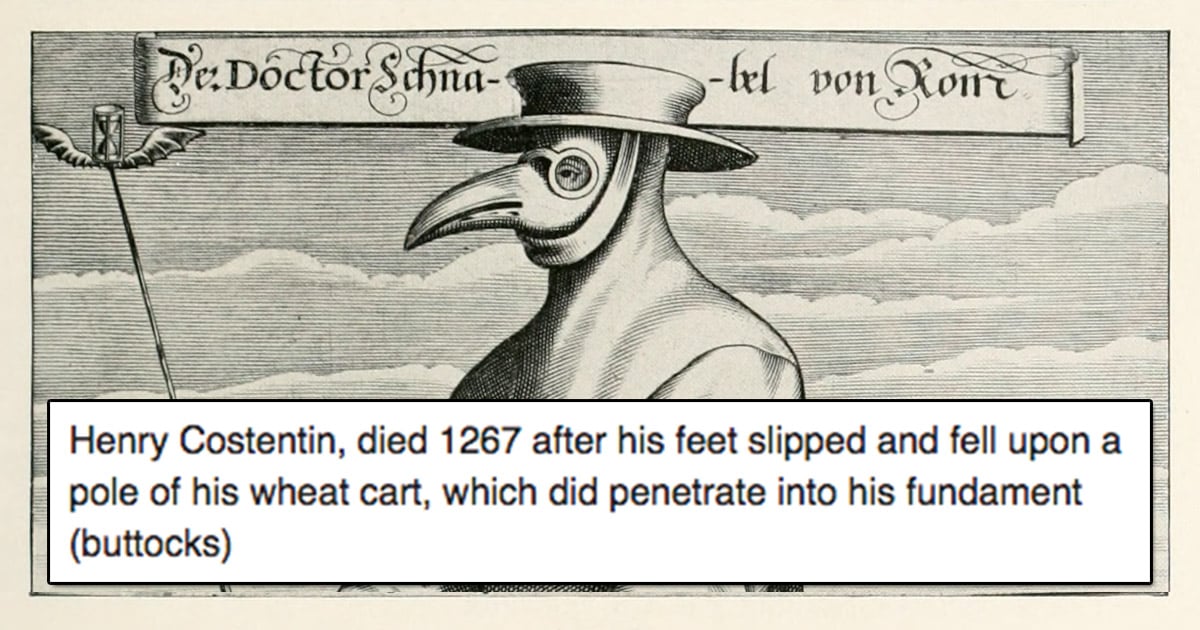 Here’s 25 of the best deaths of olden times – take it away death bot!

John de Thorpe, drowned in 1322 when thrown in tempestuous waters from his boat, the “Dongbot”

Simon the Welshman, clerk, died 1306, struck w a knife on the head by W., vicar, for being late to church to ring the bells for matins

Henry Costentin, died 1267 after his feet slipped and fell upon a pole of his wheat cart, which did penetrate into his fundament (buttocks)

Agnes Perone, half a year old, died 1396, killed by a sow, who ate her head even to the nose. The sow was arrested

William Scrym, died 1382, fell from a tree attempting to overthrow a nest of magpies

John de Waltham, struck upon his head with malice in 1322 by John Myng in the lane called “Shitebournelane”

Philip the Young, died 1312, shot with a small arrow by John, son of Alan the Mustardmaker

Johanna, daughter of Bernard de Irlaunde, died in 1322, being mortally bitten by a sow while lying in her cradle. The sow valued at 13 1/2 d

Henry de Stodley, died 1346, being very drunk, stumbled into his chamber and fell upon a bare knife, which cut his throat

Robert de Honiton, died 1301. On New Year’s Eve he went up the tower of St. Michael’s to help ring the bells and fell through a trap door

John de Bois, died 1300 when a timber fell upon his head, inflicting a wound 4 inches long & 2 deep. The price of the wood, 1 penny

Robert de Balsham, already suffering from an infirmity, rose from his bed & laid himself on the ground where he immediately died in 1301

Roger, died 1396, knocked off a bridge by a horse carrying wheat

John Sadeler, died 1394, was taken by “falling sickness” and suddenly fell to the ground and died

Bertram Polet, found dead in 1271, assumed to have been slain by “evil-doers.”

William Tyler, died 1389 in an altercation between two sclatteres, one of which had thrown a hammer at the other, and hit William instead

John Cobbler, killed by William of Wellington’s clerk, John, who refused to pay for a candle. He struck the brains from his skull instead

Matilda de Gareford, died 1344, fell into a well, but arose, later only to collapse in the street and die there

A dead man, found in 1362 by John Atfield, who had not been wounded, but “somewhat lacerated by dogs.”

Robert Hendy, died in 1396 when, attempting to drink from a river, he fell in instead and drowned by misadventure

Henry, son of Nicholas le Clerk, died at age 14 in 1432, dragged to death by a horse which had been startled by a bird

@DeathMedieval writes some background to all this:

I’m going to talk a bit about the deaths in the bot now, just because i do get quite a lot of questions about some of them as you know, these tweets are all (highly condensed) accounts of death from medieval coroner’s rolls.

These rolls are not obituaries in the sense that they list all deaths, but only those that were not witnessed, such as accidents, or those involving some sort of crime most deaths wouldn’t fall under either of these categories, so the information in a coroner’s inquest or these tweets are not representative of, say, overall medieval death statistics.

Most medieval deaths would’ve been a “good death”, that is one that was witnessed by others and involved last rites given by a priest as well as a will as for clerk murders, well! 90% of the time, the clerks in these reports are drunk teenagers away at university causing trouble there are a few deaths in prison here and there, but this is not the equivalent of “life in prison”, these would have been people who were being held awaiting trial.

Most of these reports of death in prison are very, very short and do not give much info about the death at all as for drowning deaths, we can’t chalk all of them up to an inability to swim.

Some people died due to falling into rivers or trying to cross a river, which would’ve been very, very cold, something the body has a hard time withstanding.

Not to mention, falling into a river or well fully clothed means everything they would’ve been wearing–which would be linen and wool–would get soaked through.

And wool gets very heavy when it gets wet.

So you have someone falling into freezing water & trying to get out while the body is seizing up, shaking and their clothes are getting heavier and dragging them down.

This is more likely how these deaths were so common–it wasn’t like anyone was falling into the pool in the back yard when it comes to deaths involving falling into wells specifically, we have to consider both some of this and bucket size! Buckets are likely to blame here, since some of the era were absolutely huge, holding up to 5 gallons of water.

Wooden buckets that size and being soaked with water would be quite heavy (not to mention usually being banded with iron) and with the counter-balance, it becomes easier to see how you might fall into a well attempting to get water.

There are accounts in here too of thieves breaking through walls, which is all the fault of wattle & daub! The standard house of a medieval villein (which is to say, “peasant”) in this period would’ve had walls made of wattle and daub.

These walls were constructed by weaving young branches (i think hazel was common, but don’t quote me on that exactly!) between stronger, vertical sticks.

You can think of it like wicker, if you want, since that’s a close enough visual representation.

This wattle was then covered with daub, which could be a variety of things mixed together, but was usually cow dung, sand or clay, lime, perhaps some hay.

That was then smeared over the wattle and left to dry daub was the concrete of the age, and while it held up well enough for a while, it did deteriorate over time.

This deterioration, in addition to brute force and determination on the thieves’ part, is what would make the walls of a house able to be breached this way.