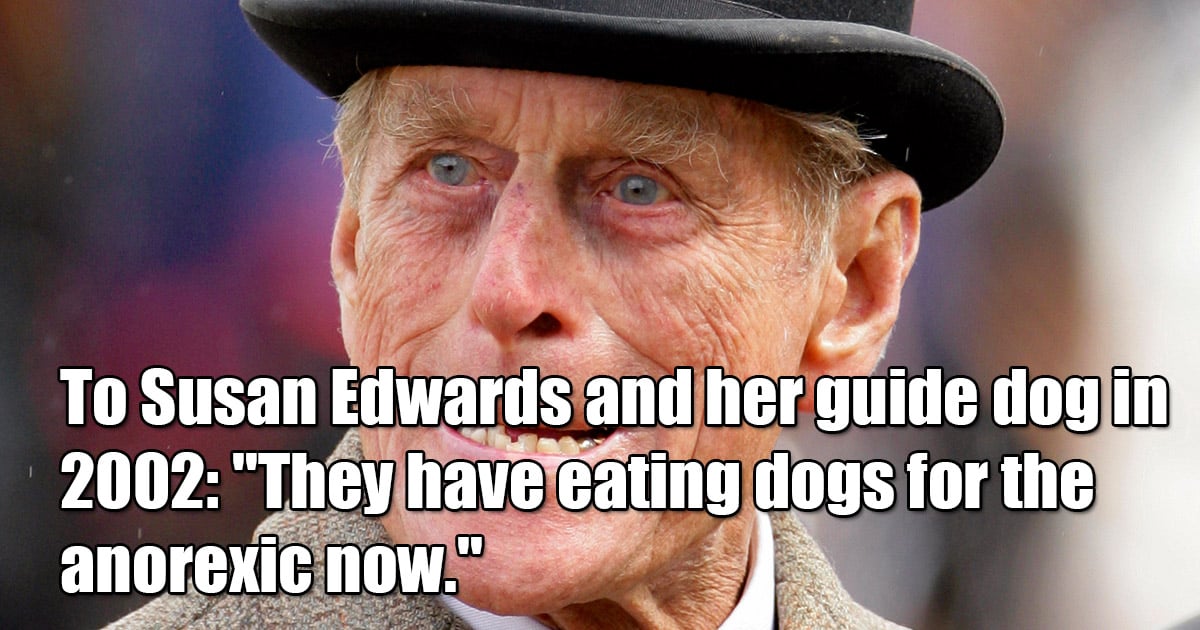 With the news Prince Philip is in hospital, let’s wish him the all the best with a celebration of his most terrible comments.

But you’re here to read his gaffes. His 66 of his best – probably the number 1 reason the Queen keeps him around – he made ghastly public events bearable by whispering rude comments in her ear.

1. “I don’t think a prostitute is more moral than a wife, but they are doing the same thing.”

5. “People think there’s a rigid class system here, but dukes have even been known to marry chorus girls. Some have even married Americans.” 2000.

7. “Where’s the Southern Comfort?” When presented with a hamper of goods by US ambassador, 1999.

12. After accepting a conservation award in Thailand in 1991: “Your country is one of the most notorious centres of trading in endangered species.”

13. After being told that Madonna was singing the Die Another Day theme in 2002: “Are we going to need ear plugs?”

14. After Dunblane massacre, 1996: “If a cricketer suddenly decided to go into a school and batter a lot of people to death with a cricket bat, are you going to ban cricket bats?”

15. Asking Cate Blanchett to fix his DVD player because she worked “in the film industry”, 2008: “There’s a cord sticking out of the back. Might you tell me where it goes?”

18. At a Scottish fish farm: “Oh! You’re the people ruining the rivers.”

19. At a WF meeting in 1986: “If it has four legs and it’s not a chair, if it’s got two wings and it flies but is not an aeroplane and if it swims and it’s not a submarine, the Cantonese will eat it.”

20. At an engineering school closed so he could officially open it, 2005: “It doesn’t look like much work goes on at this university.”

22. At Duke of Edinburgh Awards scheme, 2006. “Young people are the same as they always were. Just as ignorant.”

28. On Ethiopian art, 1965: “It looks like the kind of thing my daughter would bring back from school art lessons.”

29. On how difficult it is in Britain to get rich: “What about Tom Jones? He’s made a million and he’s a bloody awful singer.”

30. On seeing a piezo-meter water gauge in Australia: “A pissometer?”

31. On stress counselling for servicemen in 1995: “We didn’t have counsellors rushing around every time somebody let off a gun. You just got on with it!”

32. On the 1981. recession: “A few years ago, everybody was saying we must have more leisure, everyone’s working too much. Now everybody’s got more leisure time they’re complaining they’re unemployed. People don’t seem to make up their minds what they want.”

35. On Tom Jones, 1969: “It’s difficult to see how it’s possible to become immensely valuable by singing what are the most hideous songs.”

36. Peering at a fuse box in a Scottish factory, he said: “It looks as though it was put in by an Indian.” He later backtracked: “I meant to say cowboys.”

43. To Aboriginal leader William Brin, Queensland, 2002: “Do you still throw spears at each other?”

44. To a children’s band in Australia in 2002: “You were playing your instruments? Or do you have tape recorders under your seats?”

46. To Atul Patel at reception for influential Indians, 2009: “There’s a lot of your family in tonight.”

47. To black politician Lord Taylor of Warwick, 1999: “And what exotic part of the world do you come from?”

48. To Cayman Islanders: “Aren’t most of you descended from pirates?”

52. To expats in Abu Dhabi last year: “Are you running away from something?”

55. To multi-ethnic Britain’s Got Talent 2009. winners Diversity: “Are you all one family?”

56. To parents at a previously struggling Sheffield school, 2003: “Were you here in the bad old days? … That’s why you can’t read and write then!”

59. To Scottish driving instructor, 1995: “How do you keep the natives off the booze long enough to pass the test?”

60. To Simon Kelner, republican editor of The Independent, at Windsor Castle reception: “What are you doing here?” “I was invited, sir.” Philip: “Well, you didn’t have to come.”

62. To the Aircraft Research Association in 2002: “If you travel as much as we do, you appreciate the improvements in aircraft design of less noise and more comfort – provided you don’t travel in something called economy class, which sounds ghastly.”

64. To then Paraguay dictator General Stroessner: “It’s a pleasure to be in a country that isn’t ruled by its people.”