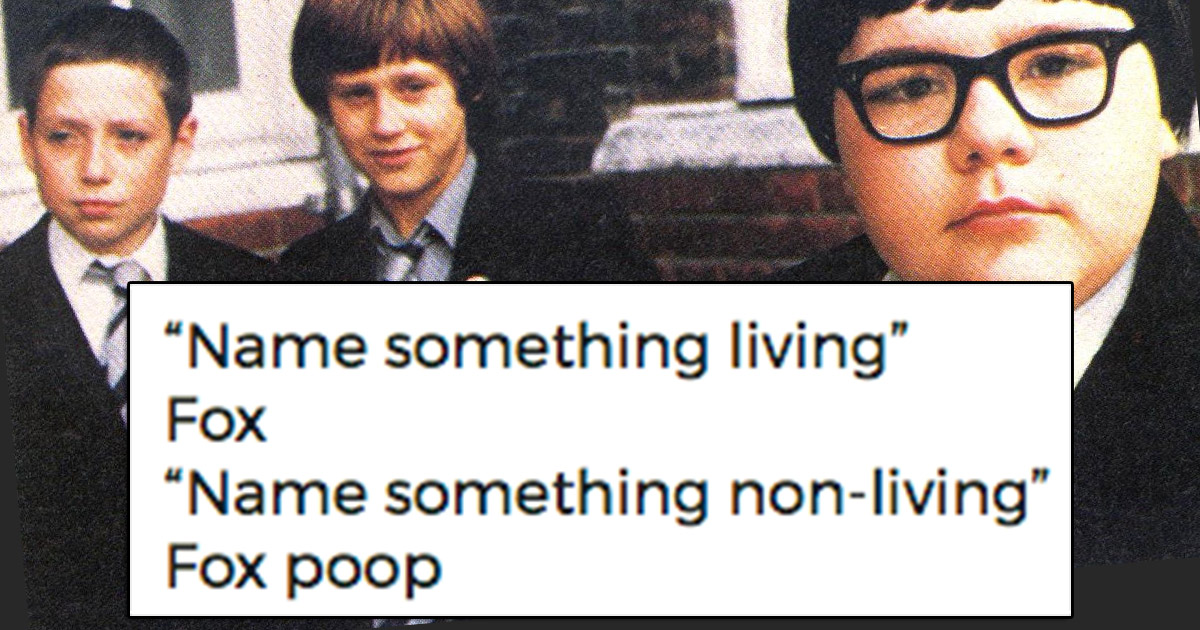 Muffinorgy over on Reddit asks, “Teachers of Reddit, what’s the funniest answer you’ve gotten from a student that technically wasn’t wrong?”

And here’s 18 of the very best answers:

I asked ‘when is a time you have used integrity?’

He wrote down ‘I wash my hands after going to the bathroom, even if no one is in there’.

My sweet little 7-year-olds overheard a 5th grade boy say “Don’t be fucking stupid” to his friend. They look up at me, eyes wide, and say, “Oooohhh, he said ‘stupid!'”
–comanecisalto

Teaching English to middle schoolers in Korea, asked: “Ok, what’s another way you can express surprise in English?” (after going over expressions like, “No way!”, “Are you serious?” “Are you kidding me?”)

Kid yells from the very back of the room: “WHAT THE FUCK!?”
–Whatsername868

“The bell went off before I got here.”
–KontraKode

I teach English to Vietnamese kids. I asked what is the population of Vietnam? The kid quickly surveyed the room and said “More than 15” This guy is going places.
–ValexDragon

The assignment was “Write the following numbers in all letters”

And so on. I gave him full points.
–yadoya

I worked in a special needs class for a year and there was the one kid with a textbook case of Asperger Syndrome. Very bright, very tough nut to crack.

I tried to tell him a corny joke once and he was not having it.

“Why did the chicken cross the road?”
“He likely had business over there or was compelled by force.”
–scotthferris

‘What side of the road do people in France drive on?’

Name two ways to determine the height of a building using a barometer that is exactly one meter long:

1) Take the barometer to the top of the building, drop it, and time how long it takes to hit the ground.

2) Find the owner of the building and say: “Hey – I have this really awesome barometer I’ll give you if you tell me how tall your building is.”
–FourOneNiner

Not a teacher but a fellow student once answered “in the head” to the question “where was JFK shot?” Instead the intended answer of “Dallas”
–SatanMakesABlogPost

I wrote an exam where the question was “Can you name three *models of DNA replication?”

Same kid on the same quiz:

Q. Describe the bus ride at the beginning of the chapter.

A. It was a bus ride filled with action, but also with emotion.

Q. What happens at the end of the story?

A. The story ends.

Kid’s going to be a politician someday.
–ReddishWedding2018

Elementary school kid saw the answer key. He swore he came up with, “Answers may vary,” all on his own.
–Nettius2

Teaching grade 5. Students were fooling around during group work so I said sarcastically, “Do I need to stand here and watch you do your work?” to which the student responded even more sarcastically, “Well you don’t have to stand, you can grab the chair and sit.”
–shaaannon08

This is intentional, but I teach a foreign language, and so when I introduce the word for “I don’t know” I call on a student who typically gets answers wrong, and ask them to translate the word as if (s)he should know it. When the student inevitability responds, “I don’t know” I tell them they’re right and the look on their face is always priceless.
–bobisbit

This made our Friday