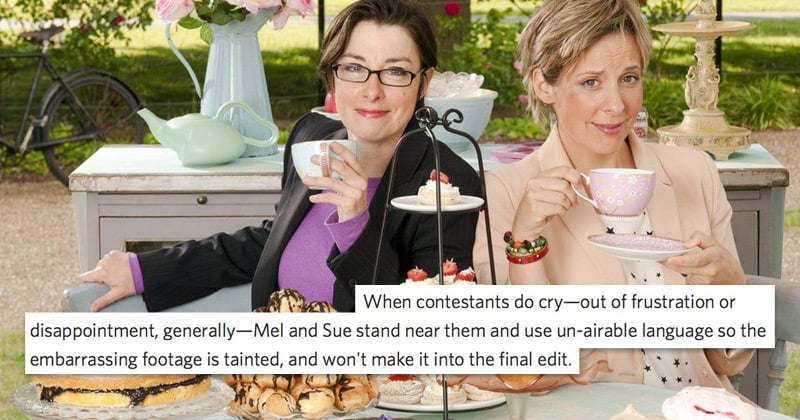 Clearly Mel and Sue are the best bit of GBBO, highlighted by this story about how they almost quit the show early on – and how they fought to make it nice, instead of the usual exploitative reality TV.

!!! The reason why GBBO is so nice is because Mel and Sue fought for it:https://t.co/ruhlBbEpqR pic.twitter.com/RaluA5Ts0S

From an article on Eater:

Here’s something you might not know about Mel and Sue: they nearly quit once before. Last year, while promoting her memoir, Sue revealed that she and Mel walked off the set during Bake Off’s first season because the producers were trying to coax human-interest drama—and the inevitable tears—out of contestants.

“We felt uncomfortable with it, and we said ‘We don’t think you’ve got the right presenters,'” Sue told the Telegraph. “I’m proud that we did that, because what we were saying was ‘Let’s try and do this a different way’—and no one ever cried again. Maybe they cry because their soufflé collapsed, but nobody’s crying because someone’s going ‘Does this mean a lot about your grandmother?'”

Bringing up dead relatives at stressful times is a time-honored technique for introducing tension into a television show, but it’s no way to treat your family.”

And how they also used coats and swearing to protect contestants.

When contestants do cry—out of frustration or disappointment, generally—Mel and Sue stand near them and use un-airable language so the embarrassing footage is tainted, and won’t make it into the final edit. “If we see them crying or something,” Sue told the Guardian, “Mel and I will go over there and put our coats over them, or swear a lot because we know then that the film won’t be able to be used.”

This Swiss “mountain finding” sign is a masterpiece of inventiveness.

The speed at which this Tetris Grandmaster plays seems almost inhuman