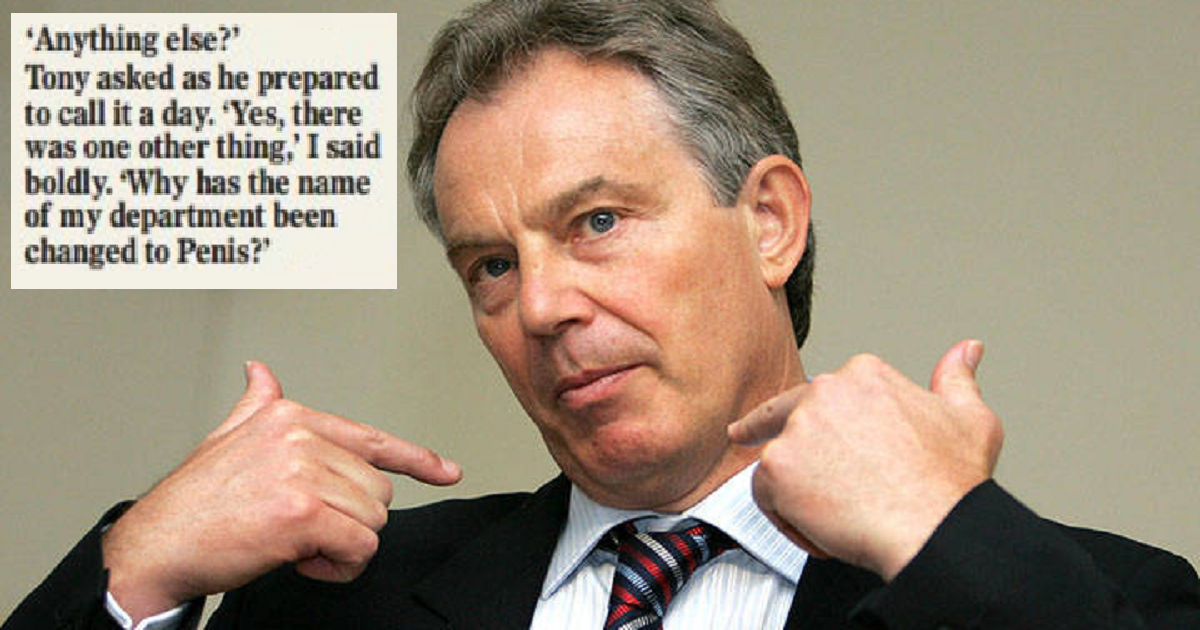 Here’s an extract, which was featured in the Mail on Sunday.

WELCOME TO THE MINISTRY OF, ER, MANHOOD

The day after the 2005 General Election, I was delighted to take a call from Tony Blair, who asked me to return to the Department of Trade and Industry as Secretary of State.

At the end of the conversation, Tony mentioned in passing that the name of the department was to be changed and that Matthew, my private secretary, would fill me in. I had a pen and paper ready when he called as promised: ‘It’s the Department of Productivity…’
I grimaced as I recorded a capital ‘P’ on my notepad. It was an ugly word to include in a departmental name. ‘… Energy (En), Industry (I) and Science (S).’

Four days later I met the Prime Minister on the rose-garden terrace at No 10, surrounded by a battalion of advisers in wicker chairs. We chatted about the challenges I faced. ‘Anything else?’ Tony asked as he prepared to call it a day. ‘Yes, there was one other thing,’ I said boldly. ‘Why has the name of my department been changed to Penis?’

There was silence. Tony took in a breath and looked quizzically at the Cabinet Secretary who, in turn, cast a searching glance at the person next to him. The question was silently passed round all ten or so people present and left hanging in the balmy air.

‘That’s a dreadful name,’ said Tony eventually. ‘Can’t we change it back again?’ I informed him that the old sign had been removed but the new one hadn’t yet been erected. The absence of a Penis erection was the cause of great merriment.

Civil servants have a gift for silly acronyms, as I’d learned when I had been appointed ‘Minister for Hell’ – Higher Education and Lifelong Learning.

I was faced with another one later at Health, where a sensible submission for an expert panel on sexually transmitted diseases was spoiled by the recommendation that it should be known as the Sexual Health Advisory Group. It would go the same way as Penis.

Can’t have people thinking there are dicks working at Whitehall…