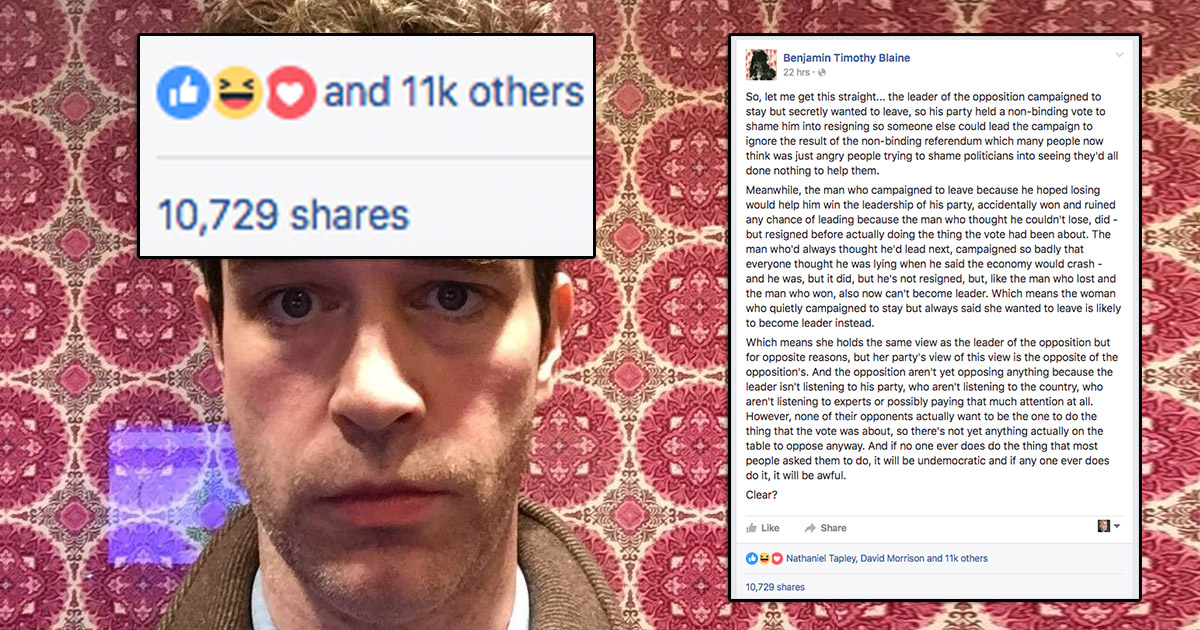 Benjamin Timothy Blaine has tried to sum up the post-Brexit Britain and it’s well worth a read – people are enjoying it too – with over 11,000 shares so far:

So, let me get this straight… the leader of the opposition campaigned to stay but secretly wanted to leave, so his party held a non-binding vote to shame him into resigning so someone else could lead the campaign to ignore the result of the non-binding referendum which many people now think was just angry people trying to shame politicians into seeing they’d all done nothing to help them.

Meanwhile, the man who campaigned to leave because he hoped losing would help him win the leadership of his party, accidentally won and ruined any chance of leading because the man who thought he couldn’t lose, did – but resigned before actually doing the thing the vote had been about. The man who’d always thought he’d lead next, campaigned so badly that everyone thought he was lying when he said the economy would crash – and he was, but it did, but he’s not resigned, but, like the man who lost and the man who won, also now can’t become leader. Which means the woman who quietly campaigned to stay but always said she wanted to leave is likely to become leader instead.

Which means she holds the same view as the leader of the opposition but for opposite reasons, but her party’s view of this view is the opposite of the opposition’s. And the opposition aren’t yet opposing anything because the leader isn’t listening to his party, who aren’t listening to the country, who aren’t listening to experts or possibly paying that much attention at all. However, none of their opponents actually want to be the one to do the thing that the vote was about, so there’s not yet anything actually on the table to oppose anyway. And if no one ever does do the thing that most people asked them to do, it will be undemocratic and if any one ever does do it, it will be awful.