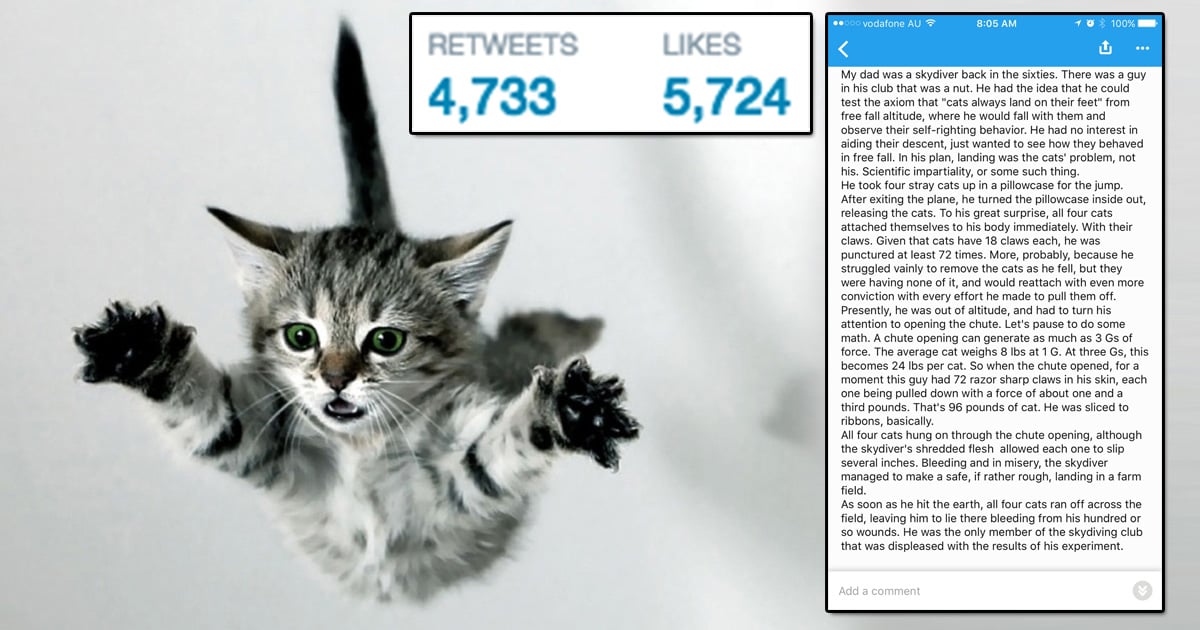 This story from Reddit has gone viral with about 10,000 internet points and it’s not hard to see why: it starts off sounding horribly cruel but by the end it’s hilarious.

My dad was a skydiver back in the sixties. There was a guy in his club that was a nut. He had the idea that he could test the axiom that “cats always land on their feet” from free fall altitude, where he would fall with them and observe their self-righting behavior. He had no interest in aiding their descent, just wanted to see how they behaved in free fall. In his plan, landing was the cats’ problem, not his. Scientific impartiality, or some such thing.

He took four stray cats up in a pillowcase for the jump. After exiting the plane, he turned the pillowcase inside out, releasing the cats. To his great surprise, all four cats attached themselves to his body immediately. With their claws. Given that cats have 18 claws each, he was punctured at least 72 times. More, probably, because he struggled vainly to remove the cats as he fell, but they were having none of it, and would reattach with even more conviction with every effort he made to pull them off.

Presently, he was out of altitude, and had to turn his attention to opening the chute. Let’s pause to do some math. A chute opening can generate as much as 3 Gs of force. The average cat weighs 8 lbs at 1 G. At three Gs, this becomes 24 lbs per cat. So when the chute opened, for a moment this guy had 72 razor sharp claws in his skin, each one being pulled down with a force of about one and a third pounds. That’s 96 pounds of cat. He was sliced to ribbons, basically.

All four cats hung on through the chute opening, although the skydiver’s shredded flesh allowed each one to slip several inches. Bleeding and in misery, the skydiver managed to make a safe, if rather rough, landing in a farm field.

As soon as he hit the earth, all four cats ran off across the field, leaving him to lie there bleeding from his hundred or so wounds. He was the only member of the skydiving club that was displeased with the results of his experiment.