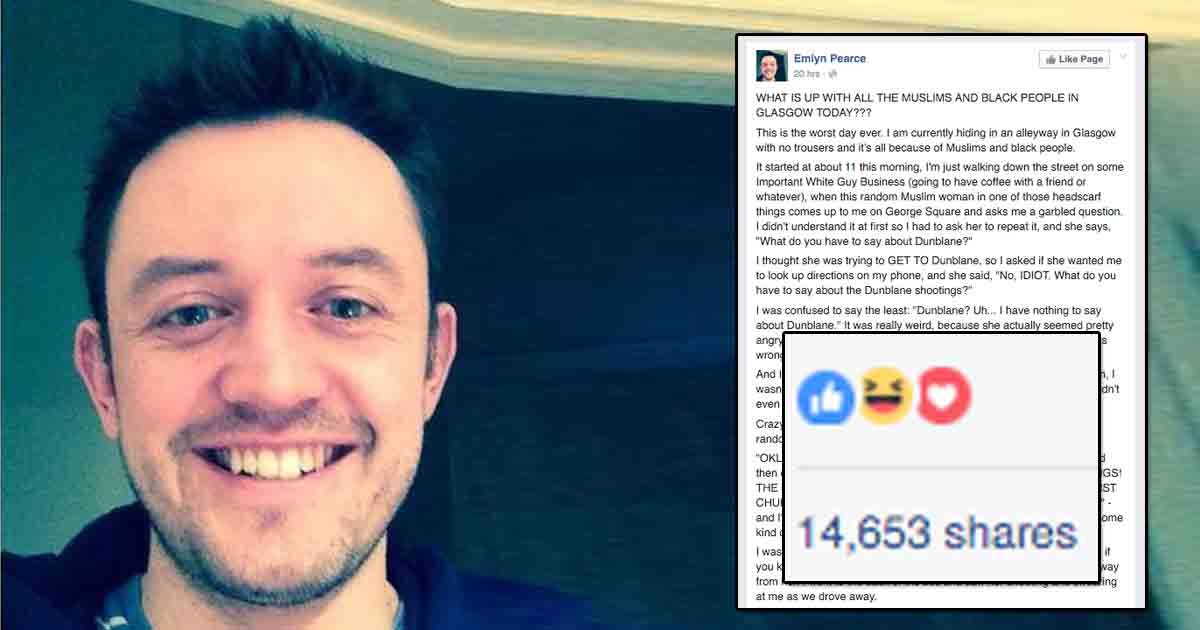 Emlyn Pearce has written a superb anti-racist Facebook post in response to both the horrible Brussels attacks and the response of Matthew Doyle who accosted a Muslim woman in the street and asked her to explain the terrorist attacks in Brussels.

Take it away Emlyn:

WHAT IS UP WITH ALL THE MUSLIMS AND BLACK PEOPLE IN GLASGOW TODAY???

This is the worst day ever. I am currently hiding in an alleyway in Glasgow with no trousers and it’s all because of Muslims and black people.

It started at about 11 this morning, I’m just walking down the street on some Important White Guy Business (going to have coffee with a friend or whatever), when this random Muslim woman in one of those headscarf things comes up to me on George Square and asks me a garbled question. I didn’t understand it at first so I had to ask her to repeat it, and she says, “What do you have to say about Dunblane?”

I thought she was trying to GET TO Dunblane, so I asked if she wanted me to look up directions on my phone, and she said, “No, IDIOT. What do you have to say about the Dunblane shootings?”

I was confused to say the least: “Dunblane? Uh… I have nothing to say about Dunblane.” It was really weird, because she actually seemed pretty angry about something. Then she said, “Why not? Don’t you think it was wrong?”

Crazy Muslim Lady then starts following me down the street screaming random place names at me:

“OKLAHOMA! UTOYA! OMAGH! PORT ARTHUR! COLUMBINE!” – and then other, completely random things – “‘ABORTION CLINIC SHOOTINGS! THE LORD’S RESISTANCE ARMY! APARTHEID! WESTBORO BAPTIST CHURCH! THE SREBRENICA MASSACRE! PAEDOPHILE PRIESTS!” – and I’m thinking, “What the heck is this? Is this a code? Is she having some kind of breakdown?”

I was actually getting a bit scared by this point (I’m a lover not a fighter, if you know what I mean), so I jumped on the first bus I saw, just to get away from her. I went to the back of the bus and saw her shouting and swearing at me as we drove away.

At the very next stop, some young Asian lads get on the bus, and they came and sat right in front of me. They seemed to be laughing at something, and then one of them just turned around, looked me right in the eye and asked me why ‘my people’ keep raping young girls.

“What do you mean?” I said, “I’m just a middle class white guy. I went to university, I’ve worked in the media – we’re good people! I’ve never raped anyone, and neither do ‘people like me’ rape people!”

(Couldn’t believe I actually had to say that, it’s so obvious!)

And the teenager replied, “Fucking pedo. I know what your lot are like. Rolf Harris, Jimmy Savile, Cyril Smith. Child abusers, the lot of you.”

“OK, whatever,” I said, thinking they’re just trying to wind me up. I moved to the front of the bus because I didn’t want any trouble, and then this old Sikh guy sitting there looks at me like I’ve broken wind, and he says, “They’re right you know, your holy book condones rape, even if you don’t.”

Now first of all, I don’t have a holy book. Sure, I’ve been christened and I celebrate Christmas, but I’m not what you’d call a Bible basher or anything. Nevertheless, I do know FOR AN ABSOLUTE FACT that the Holy Bible would never condone rape (unlike some other holy books I could mention).

“If you mean the Bible, that’s nonsense. The Bible is a book full of wisdom and light,” I said, trying to be well-mannered even though I was getting angrier by the second with all these uninformed opinions coming at me. Old Sikh Guy looked sceptical, so I told him the only Bible quote I know off by heart – “Ever heard of ‘All things bright and beautiful, all creatures great and small, the Lord God made them all’? That’s the message of the Bible.”

But that didn’t shut him up, not even a little bit!

“What about Oholibah in Ezekiel? ‘This is what the Sovereign Lord says: I will stir up your lovers against you… I will turn you over to them for punishment, and they will punish you according to their standards. I will direct my jealous anger against you, and they will deal with you in fury. They will cut off your noses and your ears, and those of you who are left will fall by the sword. They will take away your sons and daughters, and those of you who are left will be consumed by fire. They will also strip you of your clothes and take your fine jewellery. I will put a stop to the lewdness and prostitution you began in Egypt.’ That’s your God arranging the rape and mutilation of a prostitute.”

I was pretty pissed off at this point. I didn’t even reply to his bullshit, I just jumped off at the next stop – and that’s when things went from Slightly Weird to full on Twilight Zone.

Standing at the next stop were a bunch of black teenagers, about thirteen or fourteen-years-old, completely butt-naked except for some kind of white patterns painted on their skin! They looked bloody freezing, so I asked what they were doing, standing at a bus stop with nothing on, on a freezing Glaswegian day.

“We’re Xhosas,” replied the tallest boy, “We’re on our way to a coming-of-age-ceremony. We go into the wilderness for a few days, and when we come back we will be men.”

“Why are YOU wearing trousers?” said a smaller boy with World Cup ears and a cheeky smirk.

I laughed, “Isn’t it pretty obvious? Everyone wears trousers. I’m wearing them for modesty. I don’t want to walk around just revealing every part of my body to every random person I meet.”

The boys thought this was pretty funny:

“Sounds oppressive to me,” the tall boy said.

“Yes,” said a chubby lad with a big shiver. “Sounds like you’ve been brainwashed by your society.”

“Nonsense,” I said, “Trousers are objectively right. Why isn’t she covering her breasts?” I said, pointing at the only girl in the group, whose boobs were out and covered in goose bumps.

“Why should she? Why should a woman cover her breasts, but men don’t have to cover up? Don’t you think that’s pretty sexist?”

“It’s a woman’s choice to cover her breasts,” I said.

“So I won’t get arrested for walking through Glasgow like this?” said the Xhosa girl, rolling her eyes.

“Well… You might,” I replied. “I mean… You are exposing yourself. It’s pretty disgusting seeing a young girl dressed like that to be honest.”

“You know what I think is disgusting?” said the tall boy, “Your society making you ashamed of your Ham in the Hood!”

That’s when the mood suddenly changed, and World Cup Boy shouted, “Get his trousers!”

“Let’s liberate him!” said the chubby one.

“How can I trust him when I can’t see his penis?!” said the girl.

And they started trying to pull my trousers down! FOR REAL! I put up the best fight I could, but like I said, I’m a lover not a fighter, and with six or seven of them on me, I didn’t really stand a chance. They got the trousers off pretty quickly, and then my Thundercat boxers, and then they all just ran off down the road with the cheeky boy whooping and swinging my trousers around his head like a lasso! And then the tall boy had the cheek to shout back at me, “It’s for your own good! Don’t let anyone tell you what to wear!”

So here I am. I’ve managed to crawl into an alleyway and cover myself in bits of newspaper, but I really need someone to bring me some trousers so I can get home. Please, if you’re in Glasgow today with extra trousers, come and find me – SIZE DOESN’T MATTER!

Oh, that reminds me – when you see me in my naked state, please bear in mind that it is a very, very, very cold day.