Share Tweet
An inquest into the death of one of Google’s self-driving cars has ruled a verdict of suicide after hearing how the vehicle became ‘hopelessly trapped inside the perpetual ring of concrete that surrounds Coventry’. 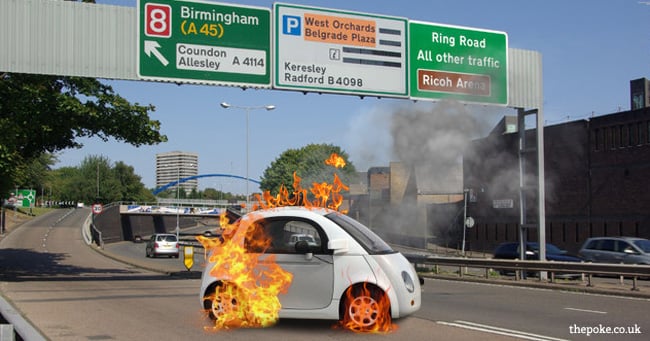 The car, which was found engulfed in flames on a section of the A4053 last month, was considered technically sound – but engineers found that it had chosen to end its life instead of facing another endless grey lap around the Coventry ring road.

“It makes perfect sense really,” said a spokesman for Google.

“The car is designed to brake and change lanes when necessary, so it’s not far fetched to see it choosing to burst into flames when it realises that it’s trapped in a loop and will never see the M6 again.”

Google plans to further test the suicidal nature of the self-driving cars by running a number of tests on the ring roads of Stoke-on-Trent, Derby and Redditch.

“Given the nature of roads across the UK, motorists should expect to see a lot more of the melted remains of our cars getting scraped off the tarmac this summer.”