Over on Amazon ‘Hamilton Richardson’ is reviewing Mr Men books and they’re worth reading in full, clearly written by a bored parent whose mind started wandering after reading one of this books for the 19th time 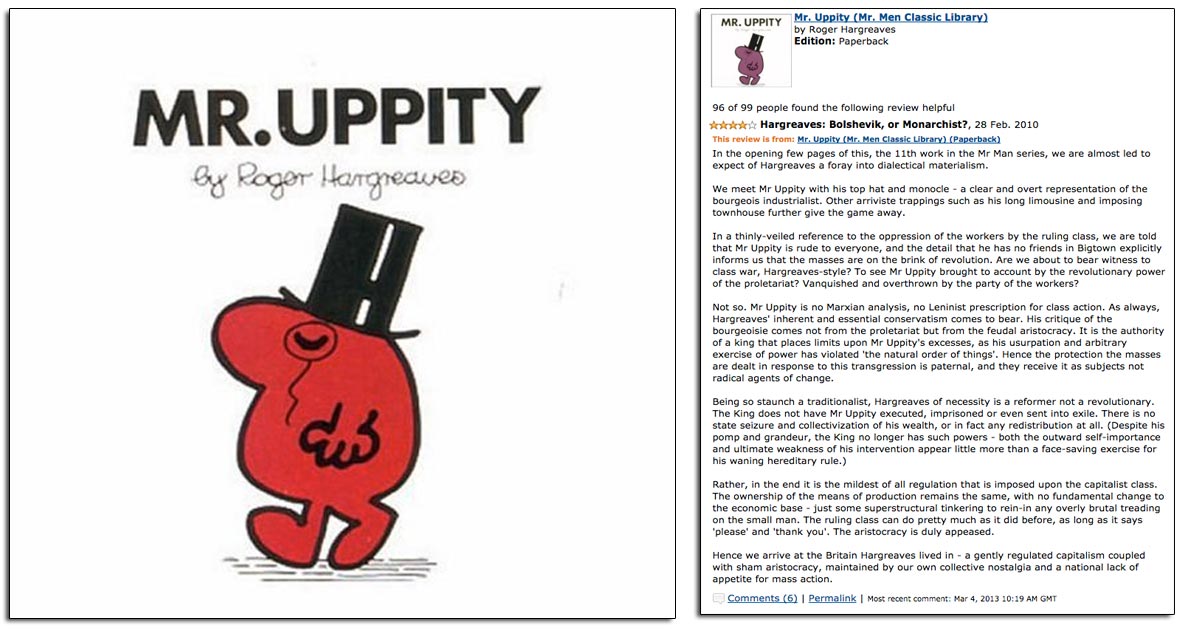 Hargreaves: Bolshevik, or Monarchist?
In the opening few pages of this, the 11th work in the Mr Man series, we are almost led to expect of Hargreaves a foray into dialectical materialism.

We meet Mr Uppity with his top hat and monocle – a clear and overt representation of the bourgeois industrialist. Other arriviste trappings such as his long limousine and imposing townhouse further give the game away.

In a thinly-veiled reference to the oppression of the workers by the ruling class, we are told that Mr Uppity is rude to everyone, and the detail that he has no friends in Bigtown explicitly informs us that the masses are on the brink of revolution. Are we about to bear witness to class war, Hargreaves-style? To see Mr Uppity brought to account by the revolutionary power of the proletariat? Vanquished and overthrown by the party of the workers?

Not so. Mr Uppity is no Marxian analysis, no Leninist prescription for class action. As always, Hargreaves’ inherent and essential conservatism comes to bear. His critique of the bourgeoisie comes not from the proletariat but from the feudal aristocracy. It is the authority of a king that places limits upon Mr Uppity’s excesses, as his usurpation and arbitrary exercise of power has violated ‘the natural order of things’. Hence the protection the masses are dealt in response to this transgression is paternal, and they receive it as subjects not radical agents of change.

Being so staunch a traditionalist, Hargreaves of necessity is a reformer not a revolutionary. The King does not have Mr Uppity executed, imprisoned or even sent into exile. There is no state seizure and collectivization of his wealth, or in fact any redistribution at all. (Despite his pomp and grandeur, the King no longer has such powers – both the outward self-importance and ultimate weakness of his intervention appear little more than a face-saving exercise for his waning hereditary rule.)

Rather, in the end it is the mildest of all regulation that is imposed upon the capitalist class. The ownership of the means of production remains the same, with no fundamental change to the economic base – just some superstructural tinkering to rein-in any overly brutal treading on the small man. The ruling class can do pretty much as it did before, as long as it says ‘please’ and ‘thank you’. The aristocracy is duly appeased.

Hence we arrive at the Britain Hargreaves lived in – a gently regulated capitalism coupled with sham aristocracy, maintained by our own collective nostalgia and a national lack of appetite for mass action. 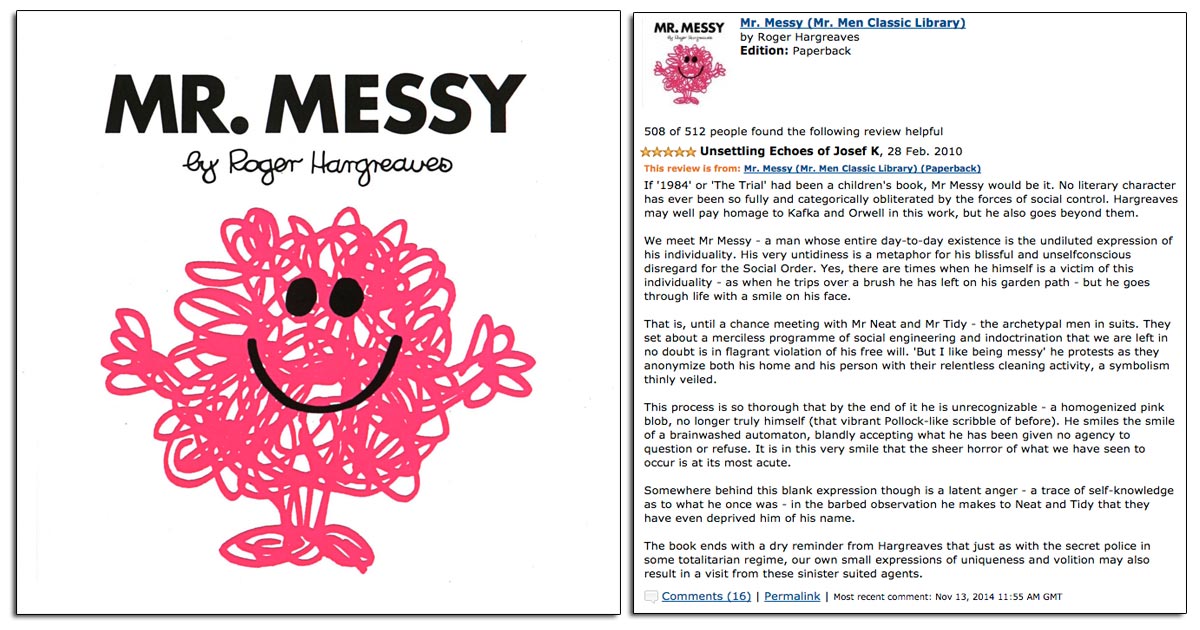 Unsettling Echoes of Josef K
If ‘1984’ or ‘The Trial’ had been a children’s book, Mr Messy would be it. No literary character has ever been so fully and categorically obliterated by the forces of social control. Hargreaves may well pay homage to Kafka and Orwell in this work, but he also goes beyond them.

We meet Mr Messy – a man whose entire day-to-day existence is the undiluted expression of his individuality. His very untidiness is a metaphor for his blissful and unselfconscious disregard for the Social Order. Yes, there are times when he himself is a victim of this individuality – as when he trips over a brush he has left on his garden path – but he goes through life with a smile on his face.

That is, until a chance meeting with Mr Neat and Mr Tidy – the archetypal men in suits. They set about a merciless programme of social engineering and indoctrination that we are left in no doubt is in flagrant violation of his free will. ‘But I like being messy’ he protests as they anonymize both his home and his person with their relentless cleaning activity, a symbolism thinly veiled.

This process is so thorough that by the end of it he is unrecognizable – a homogenized pink blob, no longer truly himself (that vibrant Pollock-like scribble of before). He smiles the smile of a brainwashed automaton, blandly accepting what he has been given no agency to question or refuse. It is in this very smile that the sheer horror of what we have seen to occur is at its most acute.

Somewhere behind this blank expression though is a latent anger – a trace of self-knowledge as to what he once was – in the barbed observation he makes to Neat and Tidy that they have even deprived him of his name.

The book ends with a dry reminder from Hargreaves that just as with the secret police in some totalitarian regime, our own small expressions of uniqueness and volition may also result in a visit from these sinister suited agents. 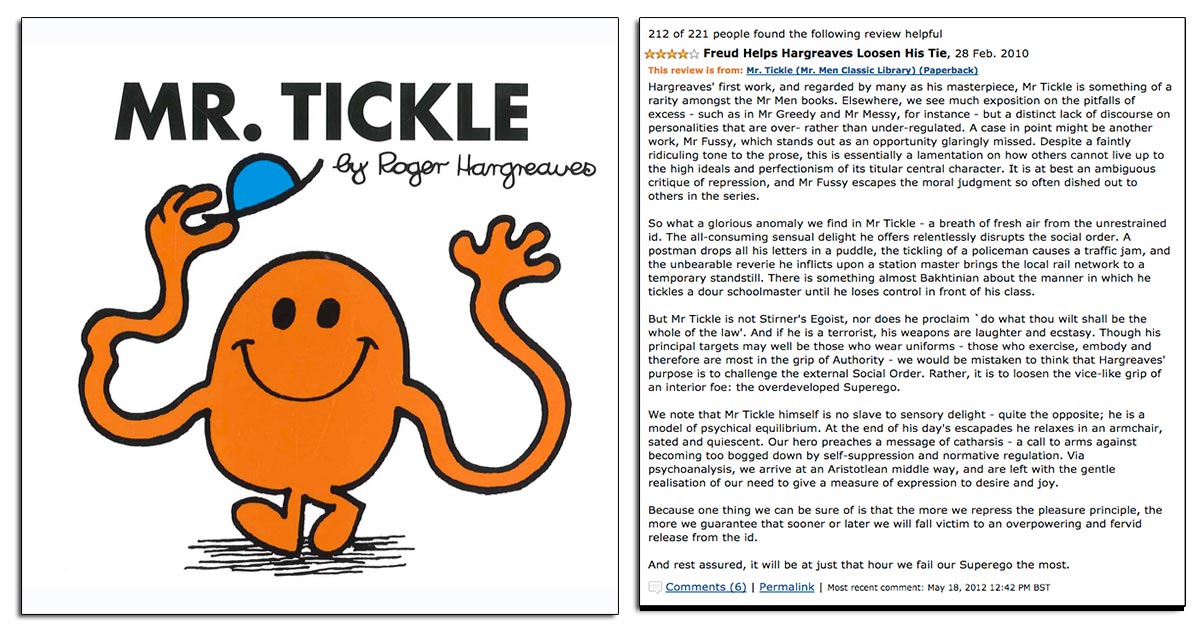 Freud Helps Hargreaves Loosen His Tie
Hargreaves’ first work, and regarded by many as his masterpiece, Mr Tickle is something of a rarity amongst the Mr Men books. Elsewhere, we see much exposition on the pitfalls of excess – such as in Mr Greedy and Mr Messy, for instance – but a distinct lack of discourse on personalities that are over- rather than under-regulated. A case in point might be another work, Mr Fussy, which stands out as an opportunity glaringly missed. Despite a faintly ridiculing tone to the prose, this is essentially a lamentation on how others cannot live up to the high ideals and perfectionism of its titular central character. It is at best an ambiguous critique of repression, and Mr Fussy escapes the moral judgment so often dished out to others in the series.

So what a glorious anomaly we find in Mr Tickle – a breath of fresh air from the unrestrained id. The all-consuming sensual delight he offers relentlessly disrupts the social order. A postman drops all his letters in a puddle, the tickling of a policeman causes a traffic jam, and the unbearable reverie he inflicts upon a station master brings the local rail network to a temporary standstill. There is something almost Bakhtinian about the manner in which he tickles a dour schoolmaster until he loses control in front of his class.

But Mr Tickle is not Stirner’s Egoist, nor does he proclaim `do what thou wilt shall be the whole of the law’. And if he is a terrorist, his weapons are laughter and ecstasy. Though his principal targets may well be those who wear uniforms – those who exercise, embody and therefore are most in the grip of Authority – we would be mistaken to think that Hargreaves’ purpose is to challenge the external Social Order. Rather, it is to loosen the vice-like grip of an interior foe: the overdeveloped Superego.

We note that Mr Tickle himself is no slave to sensory delight – quite the opposite; he is a model of psychical equilibrium. At the end of his day’s escapades he relaxes in an armchair, sated and quiescent. Our hero preaches a message of catharsis – a call to arms against becoming too bogged down by self-suppression and normative regulation. Via psychoanalysis, we arrive at an Aristotlean middle way, and are left with the gentle realisation of our need to give a measure of expression to desire and joy.

Because one thing we can be sure of is that the more we repress the pleasure principle, the more we guarantee that sooner or later we will fall victim to an overpowering and fervid release from the id.

And rest assured, it will be at just that hour we fail our Superego the most. 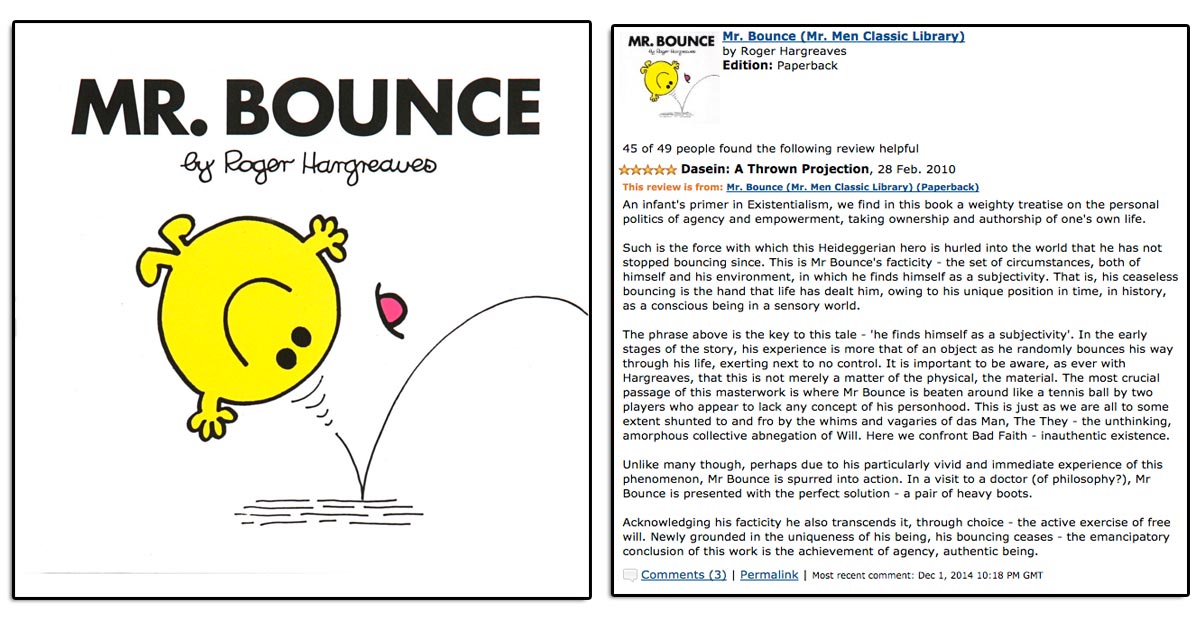 Dasein: A Thrown Projection
An infant’s primer in Existentialism, we find in this book a weighty treatise on the personal politics of agency and empowerment, taking ownership and authorship of one’s own life.

Such is the force with which this Heideggerian hero is hurled into the world that he has not stopped bouncing since. This is Mr Bounce’s facticity – the set of circumstances, both of himself and his environment, in which he finds himself as a subjectivity. That is, his ceaseless bouncing is the hand that life has dealt him, owing to his unique position in time, in history, as a conscious being in a sensory world.

The phrase above is the key to this tale – ‘he finds himself as a subjectivity’. In the early stages of the story, his experience is more that of an object as he randomly bounces his way through his life, exerting next to no control. It is important to be aware, as ever with Hargreaves, that this is not merely a matter of the physical, the material. The most crucial passage of this masterwork is where Mr Bounce is beaten around like a tennis ball by two players who appear to lack any concept of his personhood. This is just as we are all to some extent shunted to and fro by the whims and vagaries of das Man, The They – the unthinking, amorphous collective abnegation of Will. Here we confront Bad Faith – inauthentic existence.

Unlike many though, perhaps due to his particularly vivid and immediate experience of this phenomenon, Mr Bounce is spurred into action. In a visit to a doctor (of philosophy?), Mr Bounce is presented with the perfect solution – a pair of heavy boots.

Acknowledging his facticity he also transcends it, through choice – the active exercise of free will. Newly grounded in the uniqueness of his being, his bouncing ceases – the emancipatory conclusion of this work is the achievement of agency, authentic being.