The funniest “newspaper corrections” of all time

Share Tweet
Newspaper corrections are a comedy goldmine and we’ve selected 27 of the very best for your reading pleasure.

We’ve even transcribed them so you can read them clearly, that’s how much we love you, dear readers, we care. 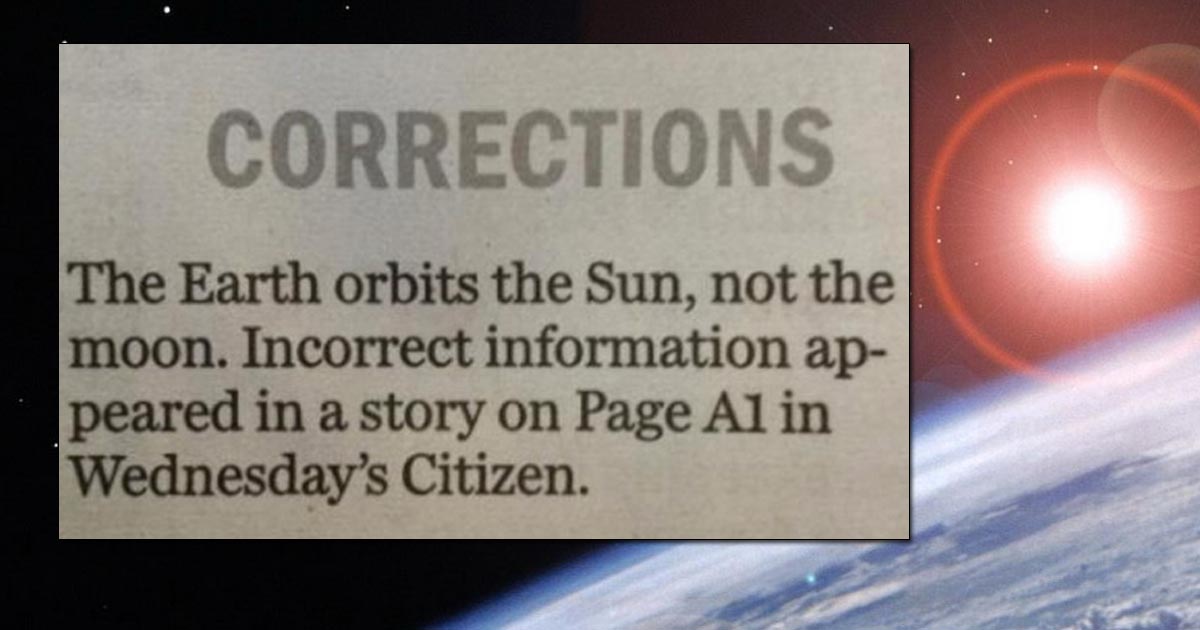 The Earth orbits the Sun, not the moon.

Incorrect information appeared in a story on Page A1 in Wednesday’s Citizen.

This post originally quoted photographer Tom Sanders as saying it takes him ﬁve years to get on the dance ﬂoor.

It takes him five beers.

A Nov. 26 article in the District edition of Local Living incorrectly said a Public Enemy song declared 9/11 a joke. The song refers to 911, the emergency phone number.

In a recipe for salsa published recently, one of the ingredients was misstated. due to an error.

These Are the 100 Most-Read Female Writers in College Classes

Correction: The original version of this included Evelyn Waugh who was a man. 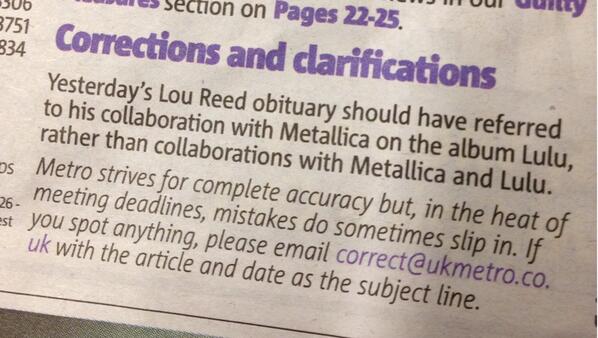 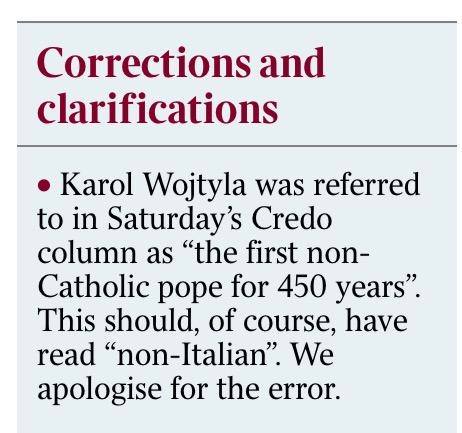 Karol Wojtyla was referred to in Saturday’s Credo column as “the first non- Catholic pope for 450 years”.

This should, of course, have read “non-Italian”. We apologise for the error.

The words ‘Python’s venom’ were removed from the headline of this article on 6 June 2015, after John Cleese pointed out that pythons are not, in fact, venomous.

Members of the Pythonidae family actually kill their prey by constriction, leading to asphyxiation. 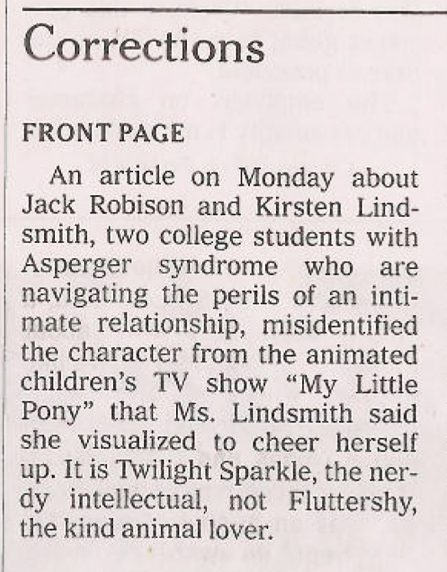 An article on Monday about Jack Robison and Kirsten Lindsmith, two college students with Asperger syndrome who are navigating the perils of an intimate relationship, misidentified the character from the animated children’s TV show “My Little Pony” that. Ms. Lindsmith said she visualized to cheer herself up.

It is Twilight Sparkle, the nerdy intellectual, not Fluttershy, the kind animal lover. 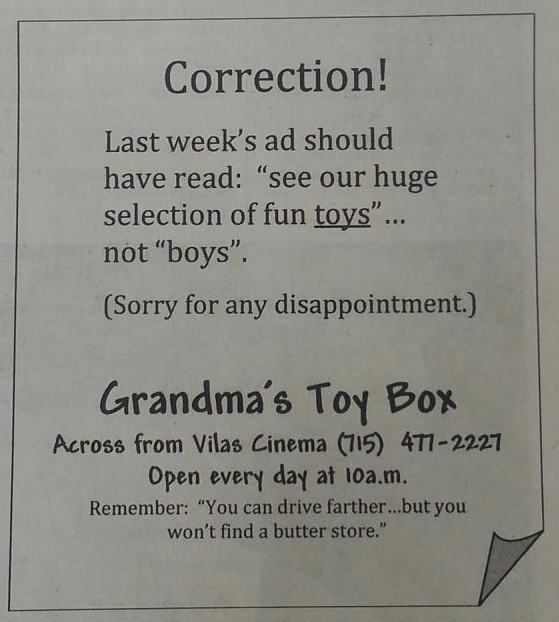 Last week’s ad should have read: “see our huge selection of fun toys”… not “boys”.

(Sorry for any disappointment.) 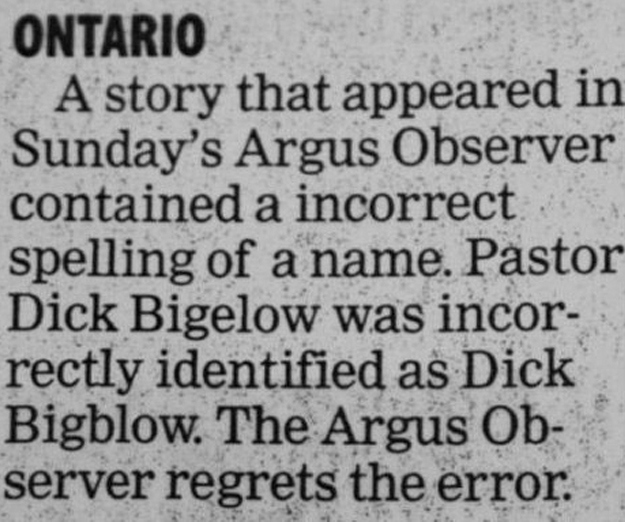 A story that appeared in Sunday’s Argus Observer contained an incorrect spelling of a name.

The Argus Observer regrets the error. 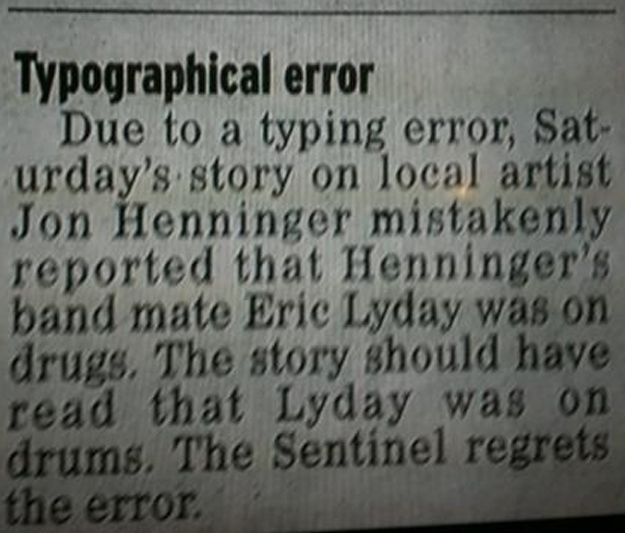 Due to a typing error, Saturday’s story on local artist Jon Henninger mistakenly reported that Henniger’s band mate Eric Lyday was on drugs.

The should have read that Lyday was on drums. The Sentinel regrets the error.

This newspaper correction caused a disturbance in the Force

In a story on Sunday about a speed dating event at Tampa Bay Comic Con, a Tampa Bay Times reporter not strong in the ways of the Force (or Star Wars lore) quoted moderator Croix Provence as asking, “Are you ready to ﬁnd love in all the wrong places?”

What Provence actually asked was, “Are you ready to ﬁnd love in Alderaan places?” She was referring to Princess Leia Organa’s home world, which appeared brieﬂy in the 1977 ﬁlm.

Regret the error. we do. 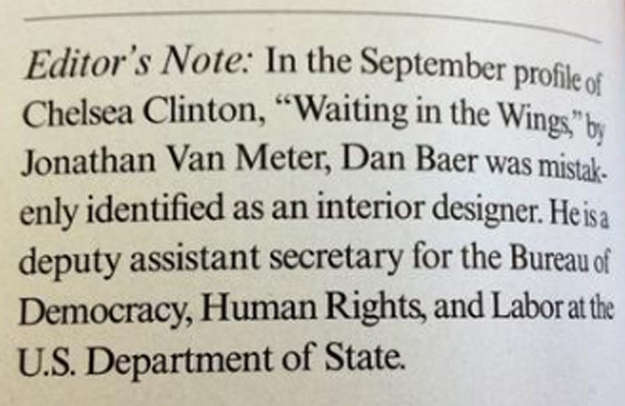 In the September profile of Chelsea Clinton, “Waiting the Wings,” by Jonathan Van Meter, Dan Baer was mistakenly identified as an interior designer.

He is deputy assistant secretary for the Bureau of Democracy, Human Rights, and Labor at the U.S. Department of State. 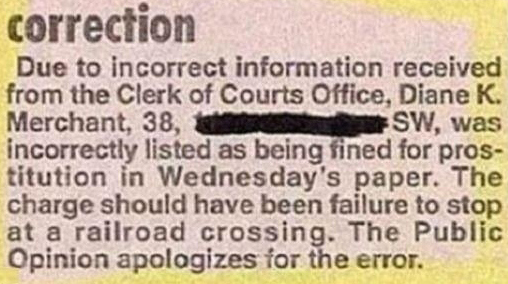 Due to incorrect information received from the Clerk of Courts Ofﬁce, Diane K. Merchant, 38, was incorrectly listed as being fined for prostitution in Wednesday’s paper.

The charge should have been failure to stop at a railroad crossing.

The Public Opinion apologizes for the error.

A headline on an item in the Feb. 5 edition of the Enquirer-Bulletin incorrectly stated “Stolen groceries.”

It should have read “Homicide.” 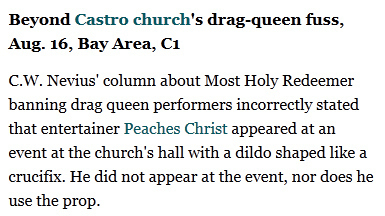 He did not appear at the event, nor does he use the prop. 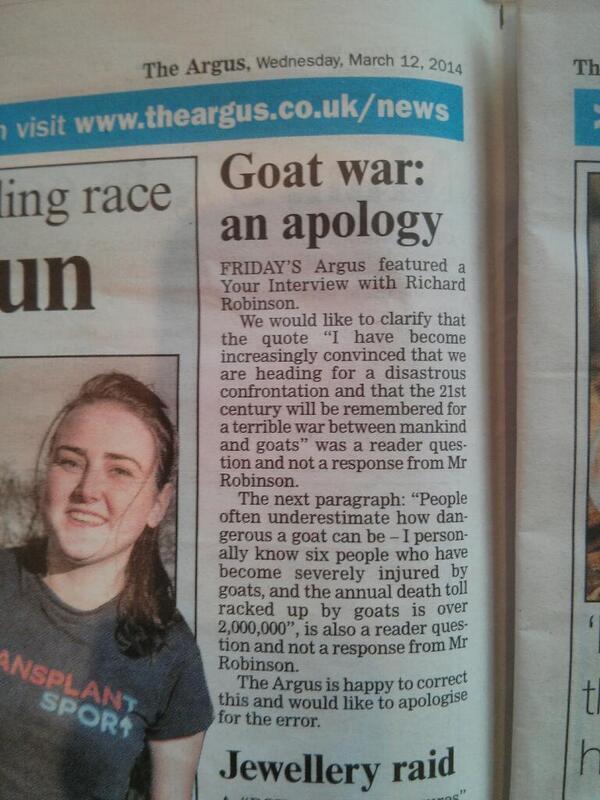 FRIDAY’S Argus featured a Your Interview with Richard Robinson.

We would like to clarify that the quote “I have become increasingly convinced that we are heading for a disastrous confrontation and that the 21st century will be remembered for a terrible war between mankind and goats” was a reader question and not a response from Mr Robinson.

The next paragraph: “People often underestimate how dangerous a goat can be – I personally know six people who have become severely injured by goats. and the annual death toll racked up by goats is over 2,000.000”, is also a reader question and not a response from Mr Robinson.

The Argus is happy to correct this and would like to apologise for the error. 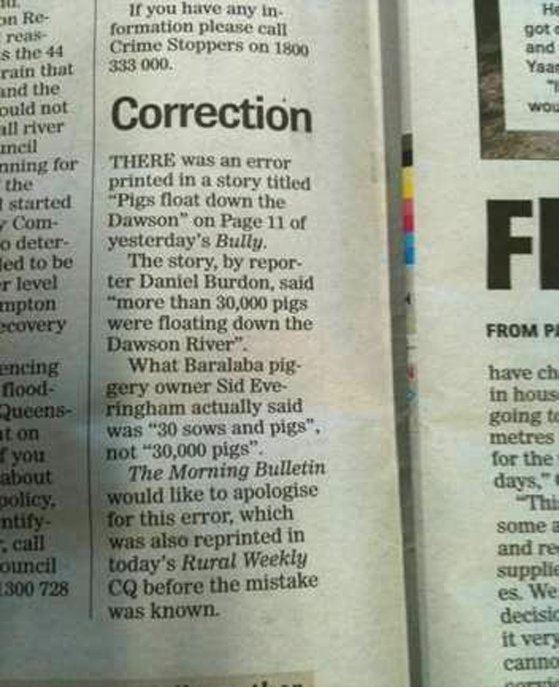 There was an error printed in a story titled ‘Pigs float down the Dawson’ on Page 11 of yesterday’s Bully.

The story, by reporter Daniel Burdon, said ‘more than 30,000 pigs were floating down the Dawson River’.

The Morning Bulletin would like to apologise for this error, which was also reprinted in today’s Rural Weekly CQ before the mistake was known. 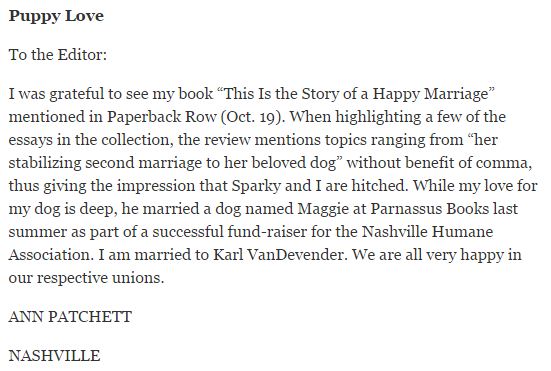 Puppy Love
To the Editor:

I was grateful to see my book “This Is the Story of a Happy Marriage” mentioned in Paperback Row (Oct. 19).

When highlighting a few of the essays in the collection, the review mentions topics ranging from “her stabilizing second marriage to her beloved dog” without beneﬁt of comma, thus giving the impression that Sparky and I are hitched.

While my love for my dog is deep, he married a dog named Maggie at Parnassus Books last summer as part of a successful fund-raiser for the Nashville Humane Association.

I am married to Karl VanDevender. We are all very happy in our respective unions. 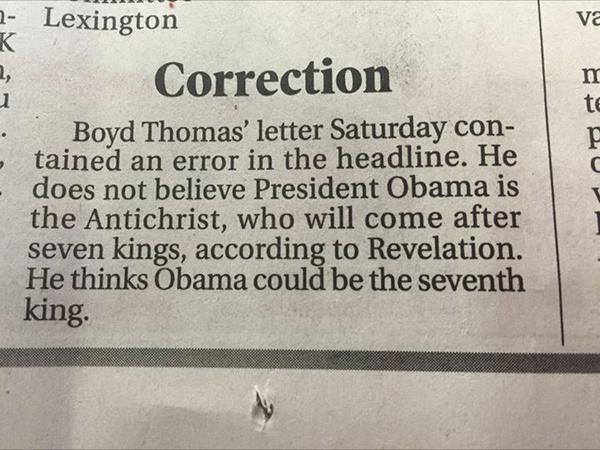 Boyd Thomas’ letter Saturday contained an error in the headline.

He does not believe President Obama is the Antichrist, who will come after the seven kings, according to Revelation. He thinks Obama could be the seventh king. 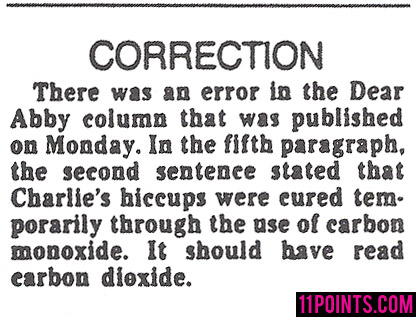 There was an error in the Dear Abby column that was published on Monday.

In the fifth paragraph. the second sentence stated that Charlie’s hiccups were cured temporarily through the use of carbon monoxide.

It should have read carbon dioxide.

In our interview with Sir Jack Hayward, the chairman of Wolverhampton Wanderers, page 20, Sport, yesterday, we mistakenly attributed to him the following comment: “Our team was the worst in the First Division and I’m sure it’ll be the worst in the Premier League.”

Congratulations!
George Brownridge for pleasing 15 women for an entire day! We were all rather exhausted and satisfied and we look forward to next year… We all thank you.’

Our intentions were to thank him for a generous holiday trip he arranged. This annual tradition is much appreciated.

Any inappropriate innuendoes were unintentional and we take full responsibility for the ad that featured in yesterday’s papers. 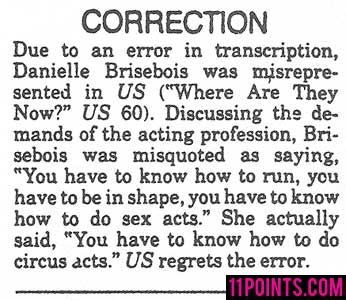 Due to an error in transcription, Danielle Brisebois was misrepresented in US (“Where Are They Now?” US 60).

She actually said, “You have to know how to do circus acts.”

US regrets the error.

27. AND FINALLY – WHEN THE SUN TROLLED SCIENTOLOGY 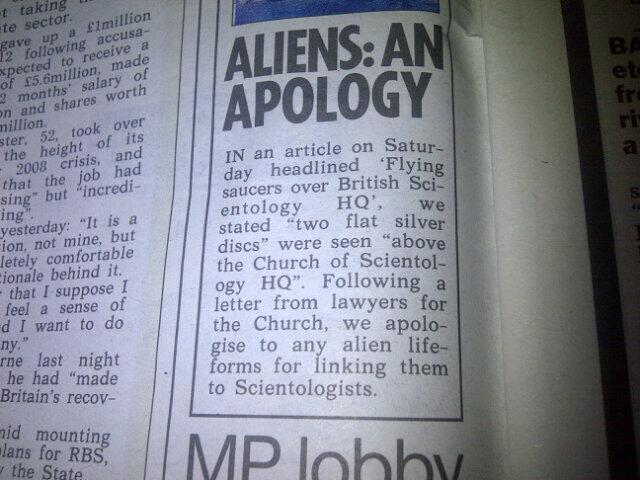 IN an article on Saturday headlined ‘Flying saucers over British Scientology HQ’, we stated “two flat silver discs” were seen “above the Church of Scientology HQ”.

Following a letter from lawyers for the Church, we apologise to any alien lifeforms for linking them to Scientologists.

We hope you enjoyed this – it was a delight for us to put together. BYEEEE!