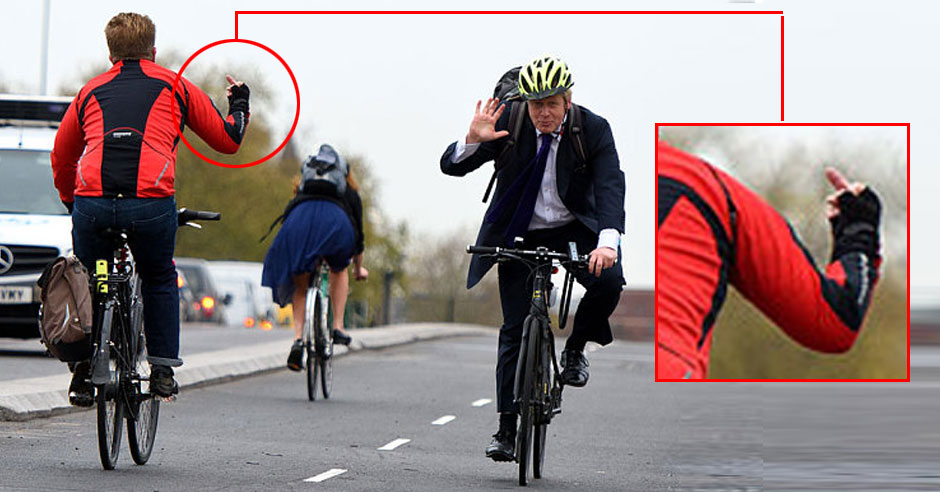 A commuter gestures to Mayor of London Boris Johnson as he cycles across Vauxhall Bridge, London, to open the latest cycle superhighway in the centre of the city.

One cyclist was pictured raising his middle finger at Mr Johnson from the cycle superhighway, who appeared to wave back at the man as their paths crossed over Vauxhall Bridge.

In Western culture, the finger (as in giving someone the finger or the bird[1] or flipping someone off,[1]) is an obscene hand gesture. It communicates moderate to extreme contempt, and is roughly equivalent in meaning to “fuck off”, “fuck you”, “shove it up your ass”, “up yours” or “go fuck yourself”. It is performed by showing the back of a closed fist that has only the middle finger extended upwards, though in some locales the thumb is extended. Extending the finger is considered a symbol of contempt in several cultures, especially Western ones. Many cultures use similar gestures to display their disrespect, although others use it to express pointing without intentional disrespect toward other cultures.

The gesture dates back to Ancient Greece and it was also used in Ancient Rome. Historically, it represented the phallus. In some modern cultures, it has gained increasing recognition as a sign of disrespect, and has been used by music artists, athletes, and politicians. Most still view the gesture as obscene.