A duck known for drinking beer from a glass and wearing a bow tie got into a fight with a dog in a pub in Devon, reports the Cheddar Valley Gazette. 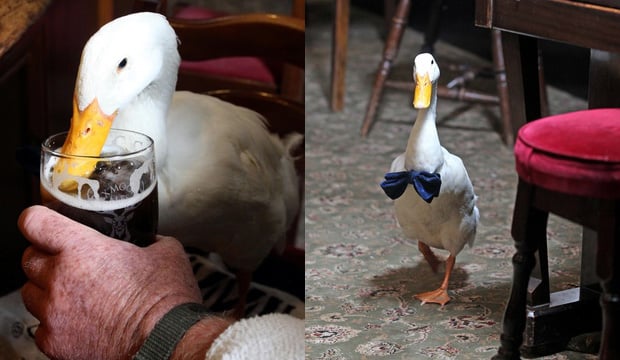 (via the Cheddar Valley Gazette)

The duck, called Star, is apparently well known for accompanying his owner to various pubs, some of which give the duck his own stool.

As sometimes happens when alcohol is involved, Star had a disagreement with a dog called Meggie – which also belongs to Star’s owner Barrie.

Barrie, of Chulmleigh, Devon, said: “Star pushed his luck too far and Meggie snapped – splitting Star’s bottom beak right down the middle. Star reportedly came out the worst for wear with a split beak, but after a visit to the vet is expected to make a full recovery. Add your own joke about the vet’s bill.