A man at the T in the Park festival had to tweet for help after his friends packed him into a tent bag as a prank, reports the Metro. 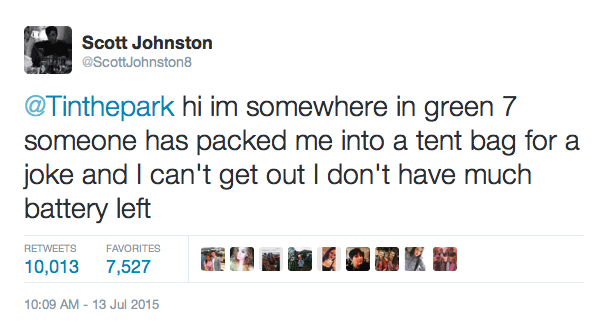 Due to the friendly, helpful nature of social networks, thousands immediately made fun of him, though the Scottish police did offer to help.

@ScottJohnston8 Hi Scott please tweet us with more info if you can. We have officers with stewards in the area looking for you now.

Scott Johnston later tweeted that he was OK and his friends had let him out. The Daily Record says he later admitted that he only tweeted it for a laugh and that he’d actually gone home earlier that morning.

Still, if you do crave attention at a festival, there are better ways of doing it.

Trending: 5 terrible new Facebook features you can look forward to