Woman calls 999 to complain about her haircut

A woman dialled 999 to call police from a hairdressers because her new haircut was “a mess”, reports the Yorkshire Post. 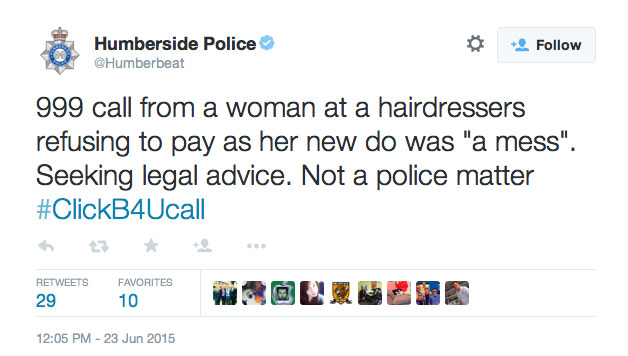 Humberside Police say they got a call last Friday from the woman who was refusing to pay and was seeking legal advice. They say that more than one in four 999 calls they receive are inappropriate, either because they do not require immediate police assistance or are not police matters at all.

Back in 2009, Devon and Cornwall police released a list of the worst time-wasting 999 calls they got that year.

Highlights include the man who wanted to take legal action over a late takeaway:

“The Chinese takeaway I ordered is 45 minutes late. I want you to prosecute the takeaway for ripping me off.”

A woman concerned about a frozen cake:

“My power has gone off. Will my Sarah Lee gateau defrost in the freezer if I keep the door shut and how long would it take?”

And this poor confused person:

“A woman dialled 999 after waking up with her duvet covering her head and panicking.”

And in 2013, West Midlands Police released this video of ridiculous 999 calls, including one from a woman who lost the password for her laptop.