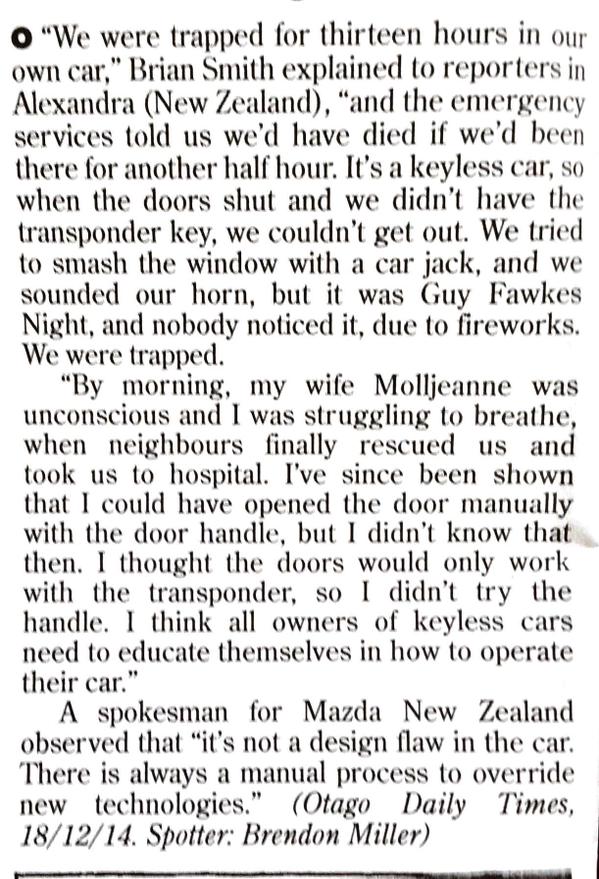 “We were trapped for thirteen hours in our own car” Brian Smith explained to reporters in Alexandra (New Zealand). “and the emergency services told us we’d have died if we’d been there for another half an hour. It’s a keyless car, so when the doors shut and we didn’t have the transponder key, we couldn’t get out. We tried to smash the window with a car jack, and we sounded our horn, but it was Guy Fawkes night and nobody noticed it, due to fireworks. We were trapped.

“By morning my wife Mollyjeanne was unconscious and I was struggling to breathe, when neighbours finally rescued us and took us to hospital. I’ve since been shown how I could have opened the car door manually with the door handle, but I didn’t know that then. I thought the doors would only work with the transponder, so I didn’t try the handle. I think all owners of keyless cars need to educate themselves in how to operate their car”

A spokesman for Mazda New Zealand observed that “it’s not a design flaw in the car. There is always a manual process to override new technologies”.