The perils of not thinking through the #YourMum hashtag 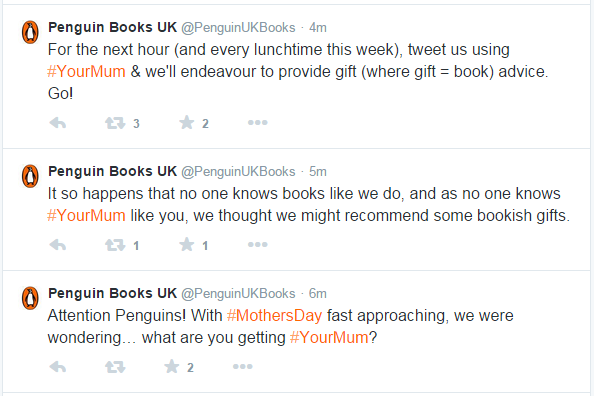 Guess what? It didn’t go at all to plan. We didn’t help.

#YourMum is so fat her blood type is gravy.

After the success of the #YourMum hashtag for Mothering Sunday, Penguin Books announces #2Girls1Cup for the Wimbledon Ladies' final.

Well, as helpful as anyone on the internet ever is.

Just chopped a pepper in half and it looked like your mum’s undercarriage. #YourMum pic.twitter.com/Ge3kXbB0qq

Hey @PenguinUKBooks, #YourMum asked me to empty her dishwasher… pic.twitter.com/S6VpSukn7F

#YourMum is like a Penguin Book. Common, cheap & available at railway stations

@flashboy @elenacresci @PenguinUKBooks I love the smell of old books. Nothing better to put my face in #YourMum

Of course some cynics suggested that it wasn’t a mistake, simply an attempt by Penguin to get the topic (and themselves) trending.

Thanks for pointing our #YourMum has an alternative meaning you guys! Now back to the books…