A romantic road worker in Wales used an eight-tonne digger to pop the question by writing his proposal with the heavy metal grab, reports the BBC. 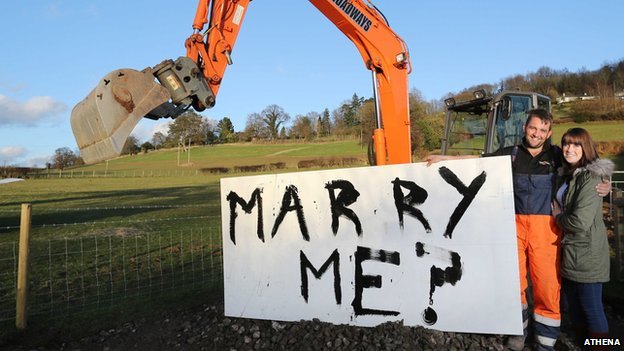 Wales Online says that Chris Morgan, 30, carefully worked the controls of his digger to take the lid off a pot of paint, pick up a paintbrush and neatly write his marriage proposal to girlfriend Beth Morgan, 25, on two wooden boards.

A workmate filmed Chris as he manoeuvred the grab to neatly write his marriage proposal to girlfriend Beth Morgan, 25.

Chris showed her the video before going down on one knee and popping the question. She said yes – although the video was filmed vertically so that’s probably reasonable grounds for divorce.