Travel News: Commuters using London bridge station hope the sacrifice of a human life will bring a brief respite to the delays, cancellations and overcrowding. 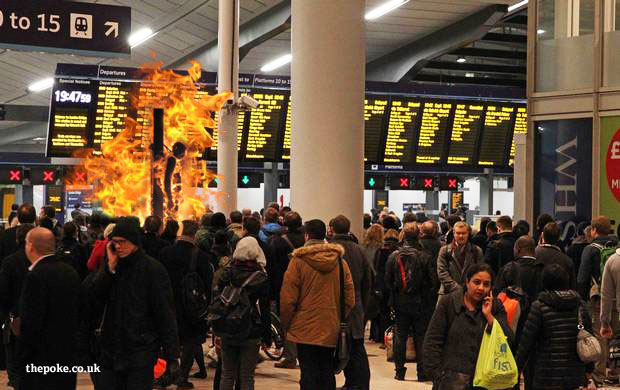 Stressed commuters came up with the controversial plan after it was announced that disruption at London Bridge Station, due to rebuilding work, is going to last more than a year.

A sacrifice was chosen at random from passengers getting off a train from Croydon – the lucky commuter was then lashed to a wooden pole and set on fire, while various chants to the ancient Thameslink Gods were made.

“My life is already shit enough without all these delays, so quite frankly if this does the trick then I’ll be the first in line with a box of matches,” said once commuter, who had previously tried punching trains in an attempt get them running.

“It was a haunting, powerful scene – although the painful screaming of the sacrificed man was drowned out by screaming from commuters when they announced the 18.27 to Sevenoaks was cancelled.”

Architecture Fact: There is a statue of Woody Harrelson in Budapest.