50 ways to liven up your working day at the office

27. Deal with unwanted lorries that block your natural light in the following manner.. [via]

28. Deal with complaints made against you [via] 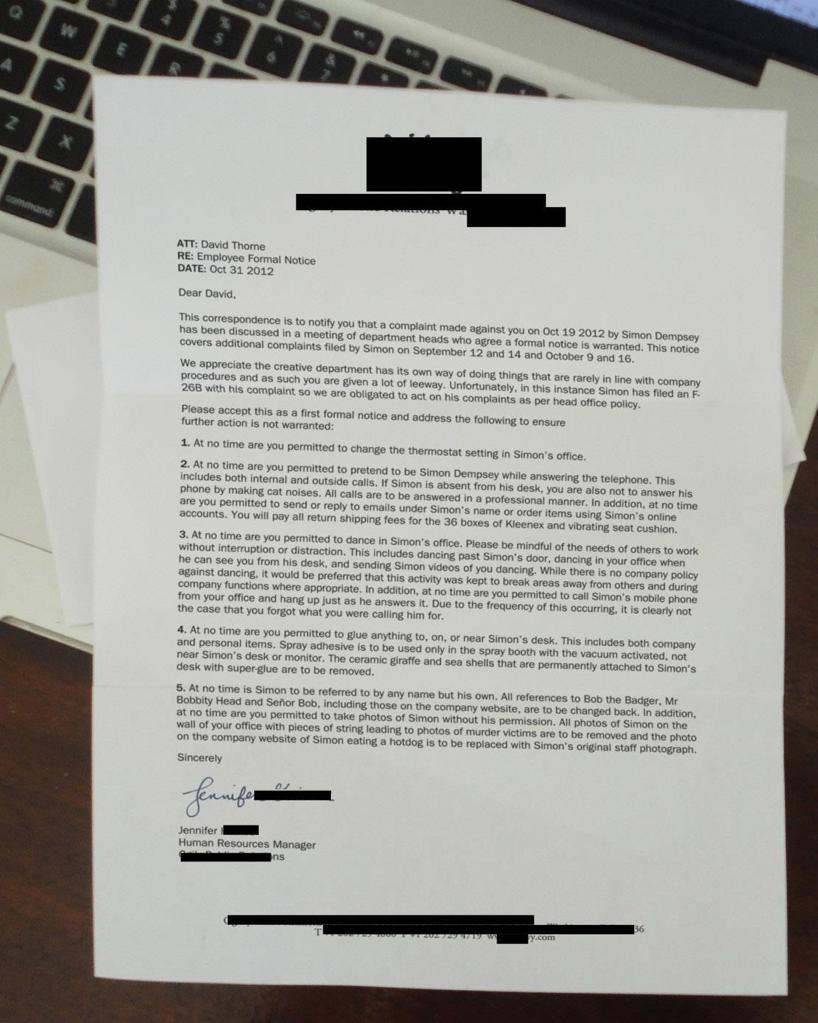 29. Go to work dressed as a tomato. [via Facebook] 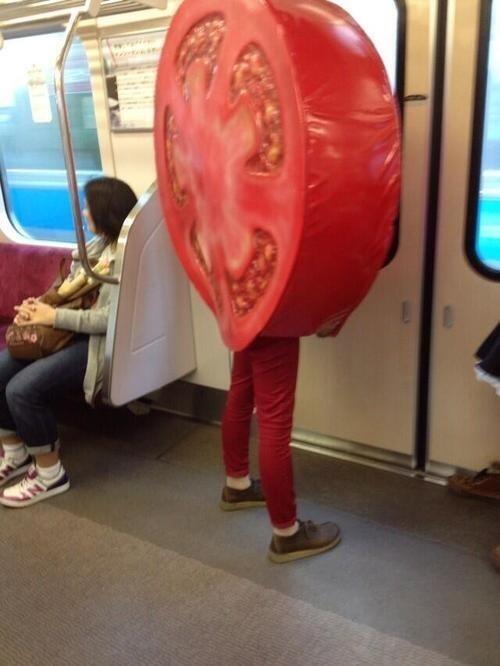 30. Leave a surprise in the kitchen [via] 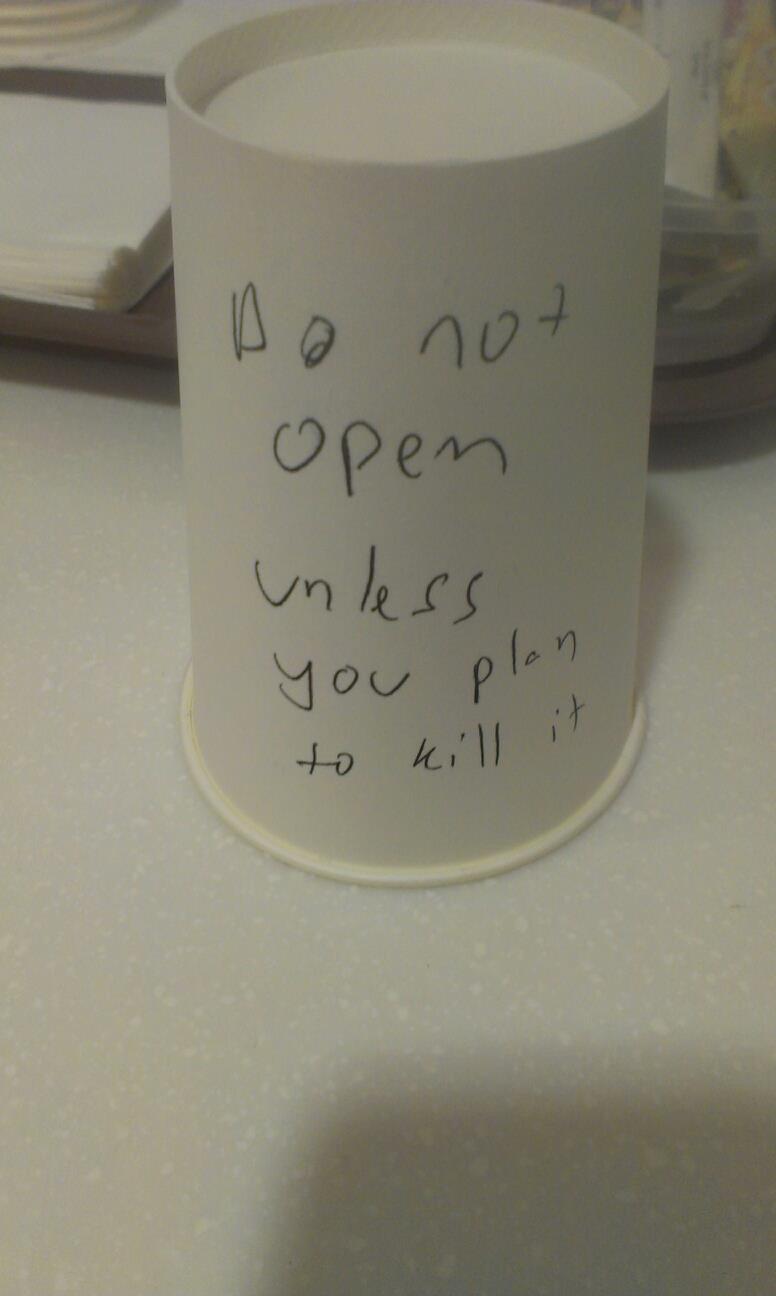 31. Take some time to appreciate how office friendships work [via] 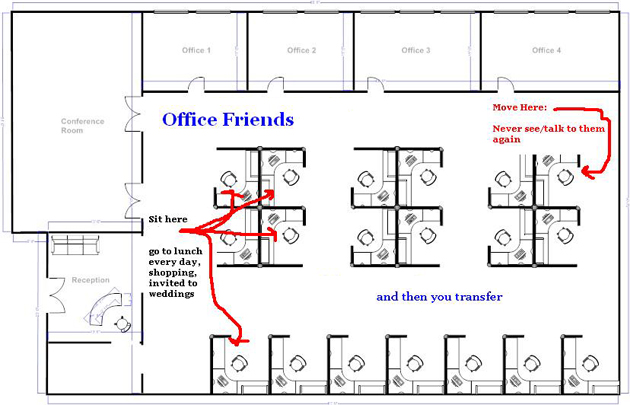 32. Deal with fridge theft appropriately [via] 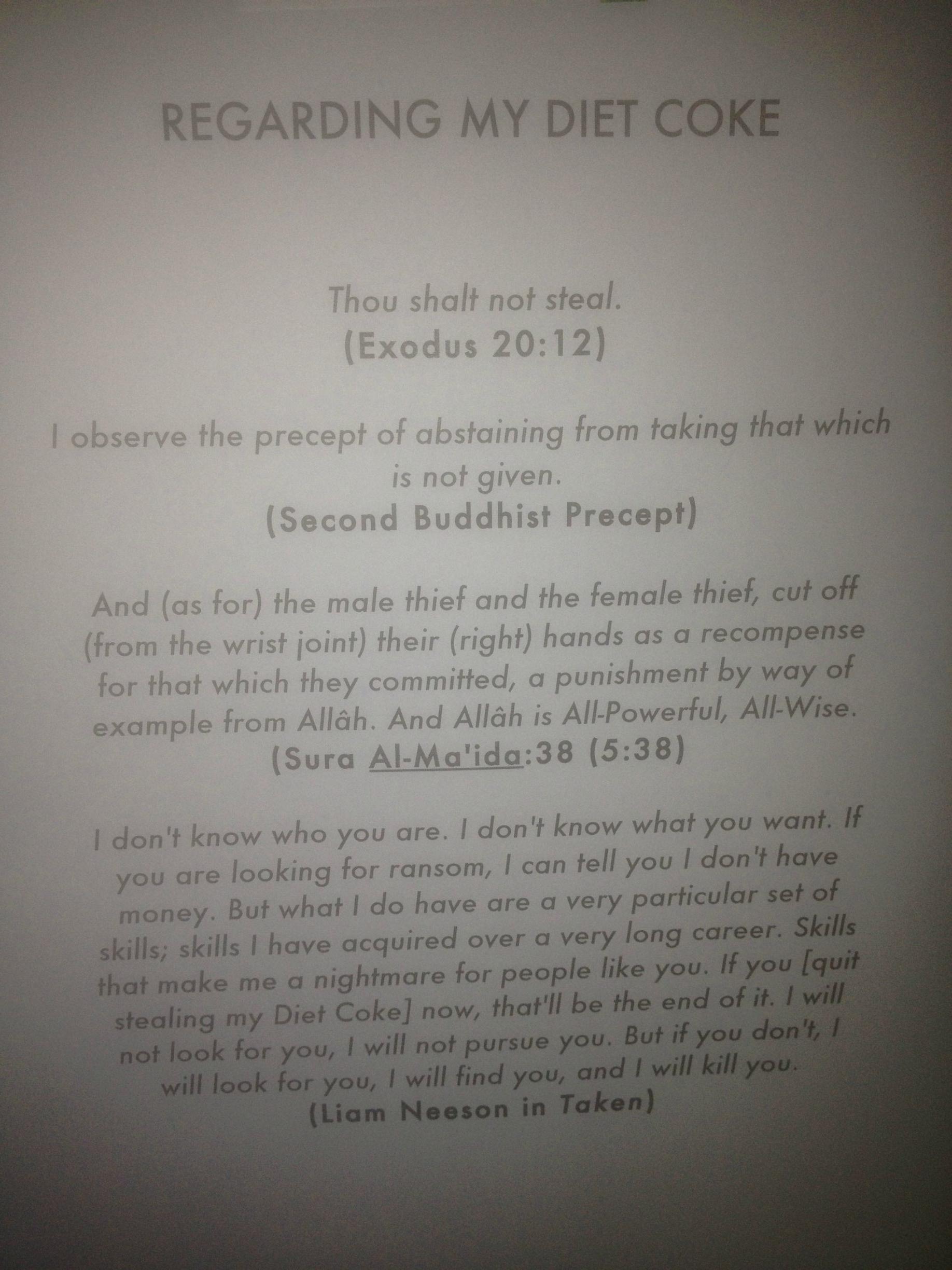 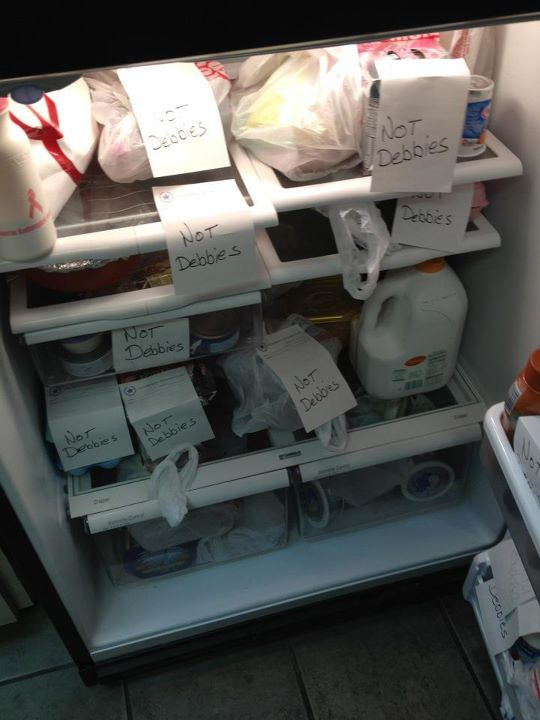 33. Surf the web again – but careful not to get caught on camera during media visits [via] 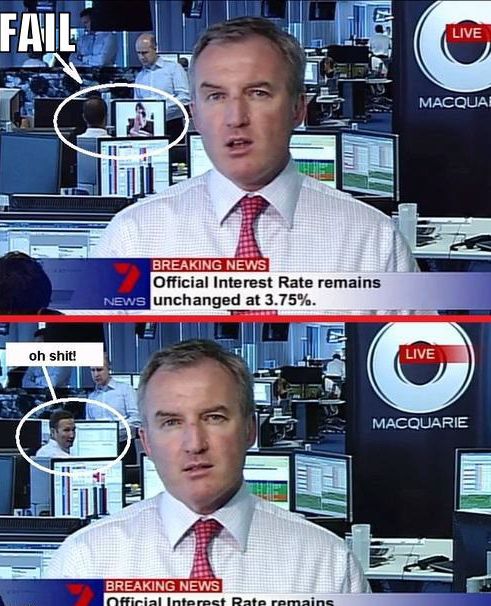 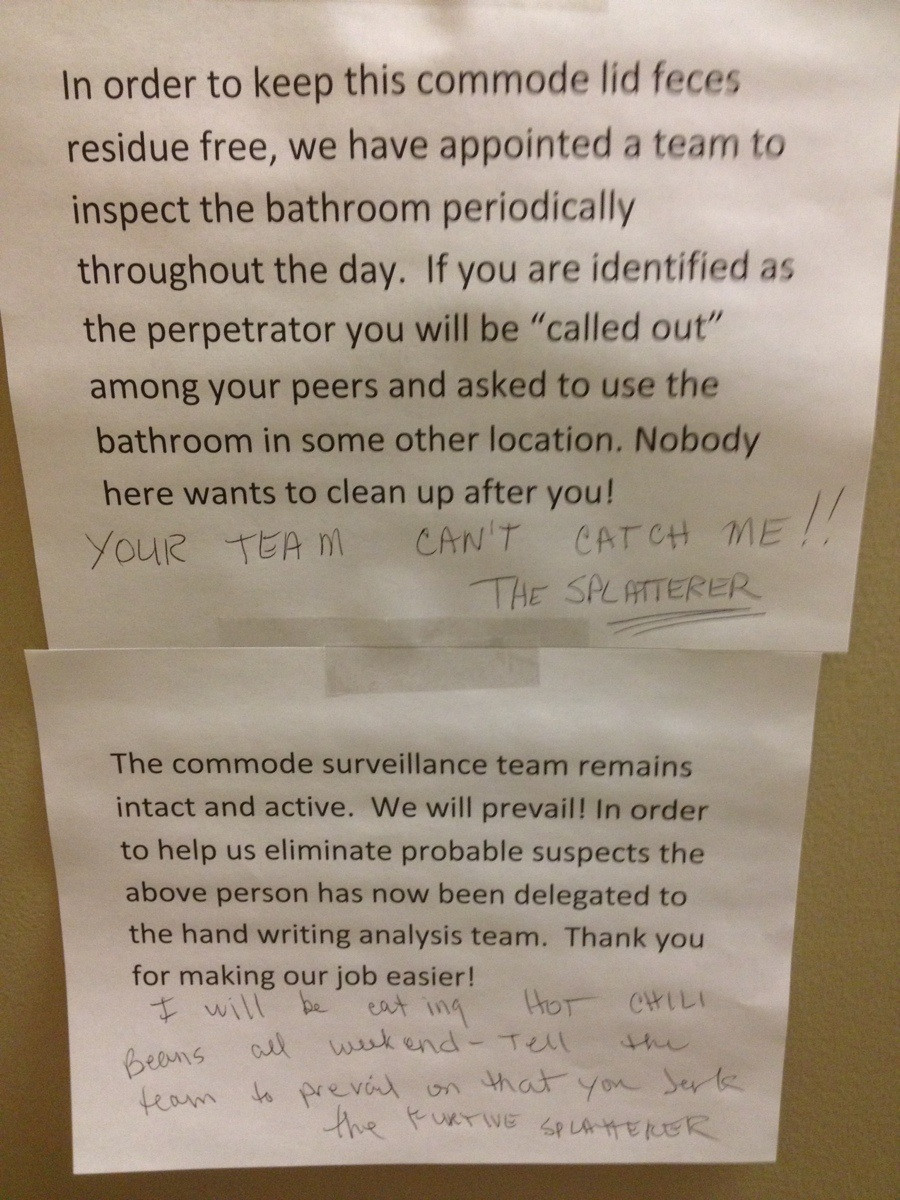 35. Have a word with the office manager about the desk lay-out [via] 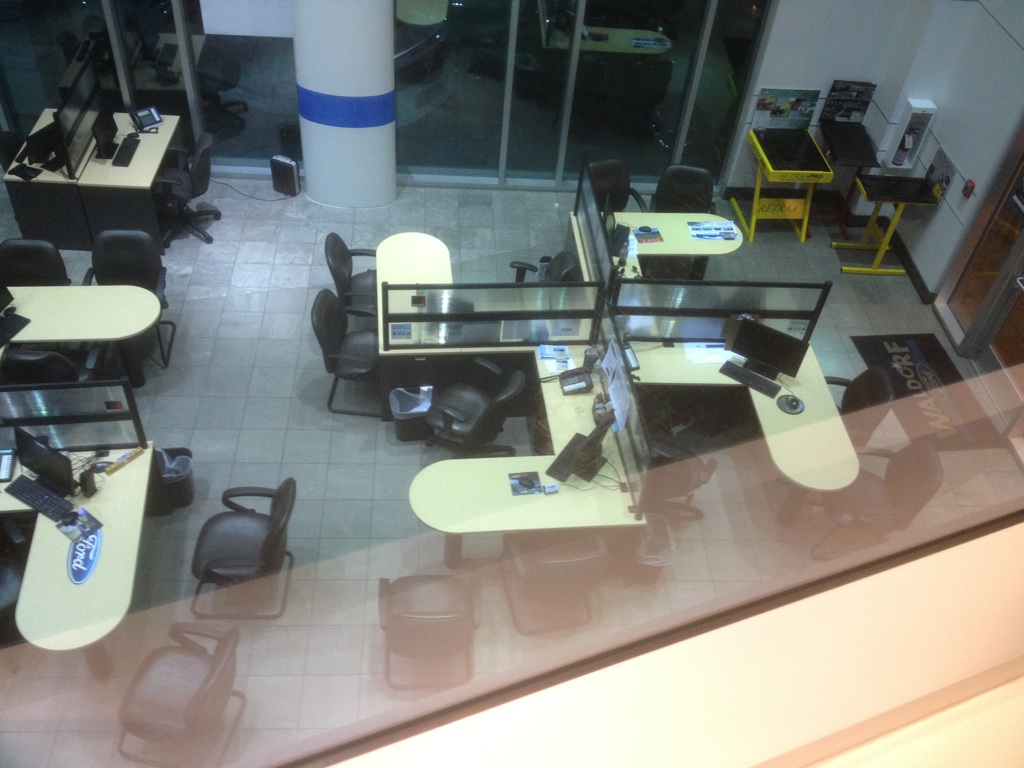 36. DO NOT allow people to use the fire exits [via] 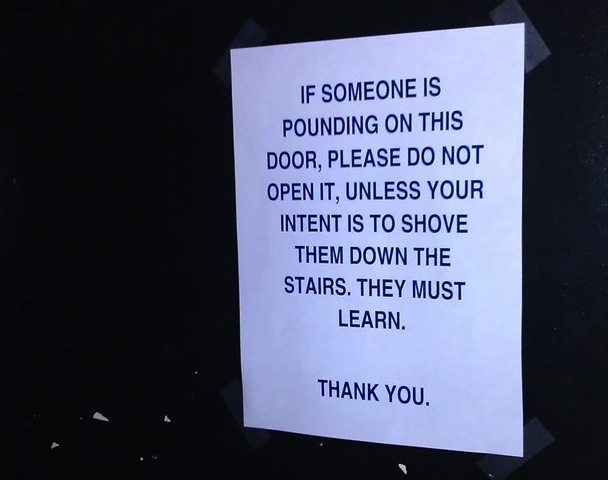 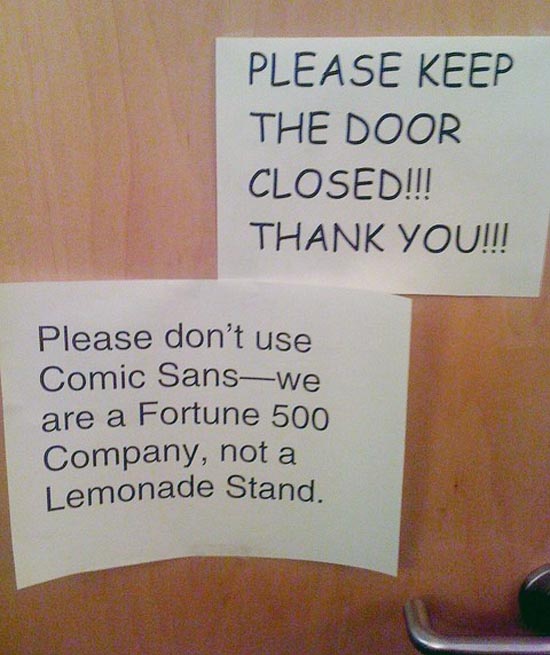 38. Make the necessary preparations for inter-desk conflict [via] 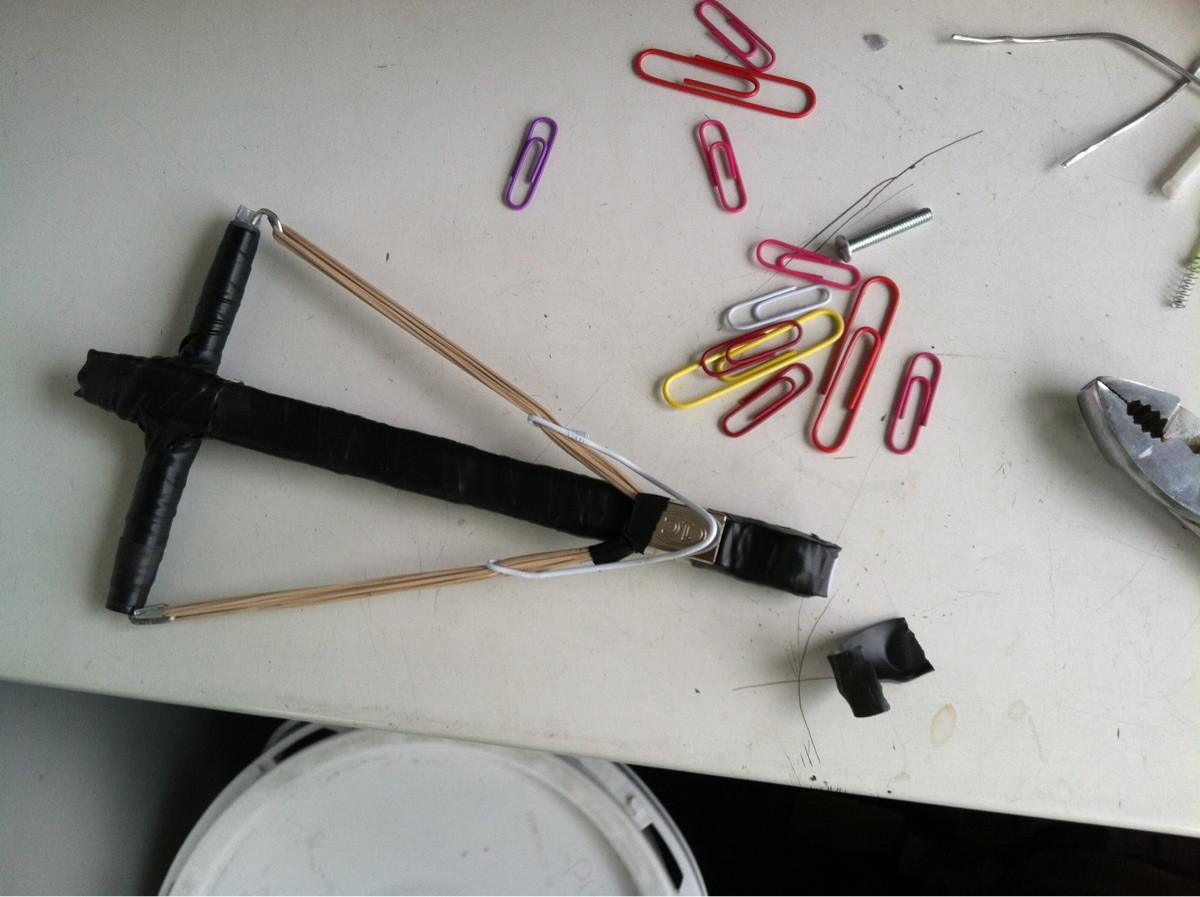 39. When your boss asks you to follow him into his office do this.

40. Use natural office resources to create entertainment [via] 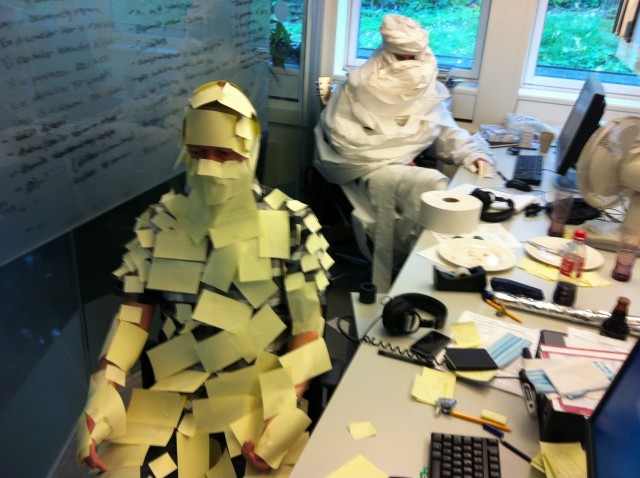 1. Ignore the first five people who say ‘good morning’ to you.

2. To signal the end of a conversation, clamp your hands over your ears.

3. Leave your fly open for one hour. If anyone points it out, say, ‘Sorry, I really prefer it this way’.

4. Walk sideways to the photocopier.

5. While riding in an lift, gasp dramatically every time the doors open.

6. When in the lift with one other person, tap them on the shoulder and pretend it wasn’t you.

7. Finish all your sentences with ‘…in accordance with the prophecy.’

8. Don’t use any punctuation

9. Interrupt your conversation with someone by giving a huge dejected sigh.

10. Use your highlighter pen on the computer screen.

1. Say to your boss, ‘I like your style’, wink, and shoot him with double-barrelled fingers.

2. Kneel in front of the water cooler and drink directly from the nozzle.

3. Shout random numbers while someone is counting.

5. Put decaf in the coffee machine for 3 weeks. Once everyone has got over their caffeine addictions, switch to espresso.

6. Keep hole-punching your finger. Each time you do, shout ‘damnit, it’s happened again!’ Then do it again.

7. Introduce yourself to a new colleague as ‘the office bike’. Then wink and pout.

8. Call the I.T. helpdesk and tell them that you can’t seem to access any pornography web sites.

1. At the end of a meeting, suggest that, for once, it would be nice to conclude with the singing of the national anthem

2. Walk into a very busy person’s office and while they watch you with growing irritation, turn the light switch on/off 10 times.

3. For an hour, refer to everyone you speak to as ‘Roger’.

4. Announce to everyone in a meeting that you ‘really have to go do a number two’.

5. When you’ve picked up a call, before speaking finish off some fake conversation with the words, ‘she can abort it for all I care.’

6. After every sentence, say ‘Mon’ in a really bad Jamaican accent.

7. In a meeting or crowded situation, slap your forehead repeatedly and mutter, ‘Shut up, damn it, all of you just shut up!’

8. At lunchtime, get down on your knees and announce, ‘As God is my witness, I’ll never go hungry again!’

9. Repeat the following conversation 10 times to the same person: ‘Do you hear that?’ ‘What?’ ‘Never mind, it’s gone now.’

10. Present meeting attendees with a cup of coffee and biscuit; smash each biscuit with your fist.

11. During the course of a meeting, slowly edge your chair towards the door.

12. As often as possible, skip rather than walk.

13. Ask people what sex they are. Laugh hysterically after they answer.

14. While a colleague is writing, grab their pen and throw it out of the nearest open window.

42. Change your manager’s desk plate [via] 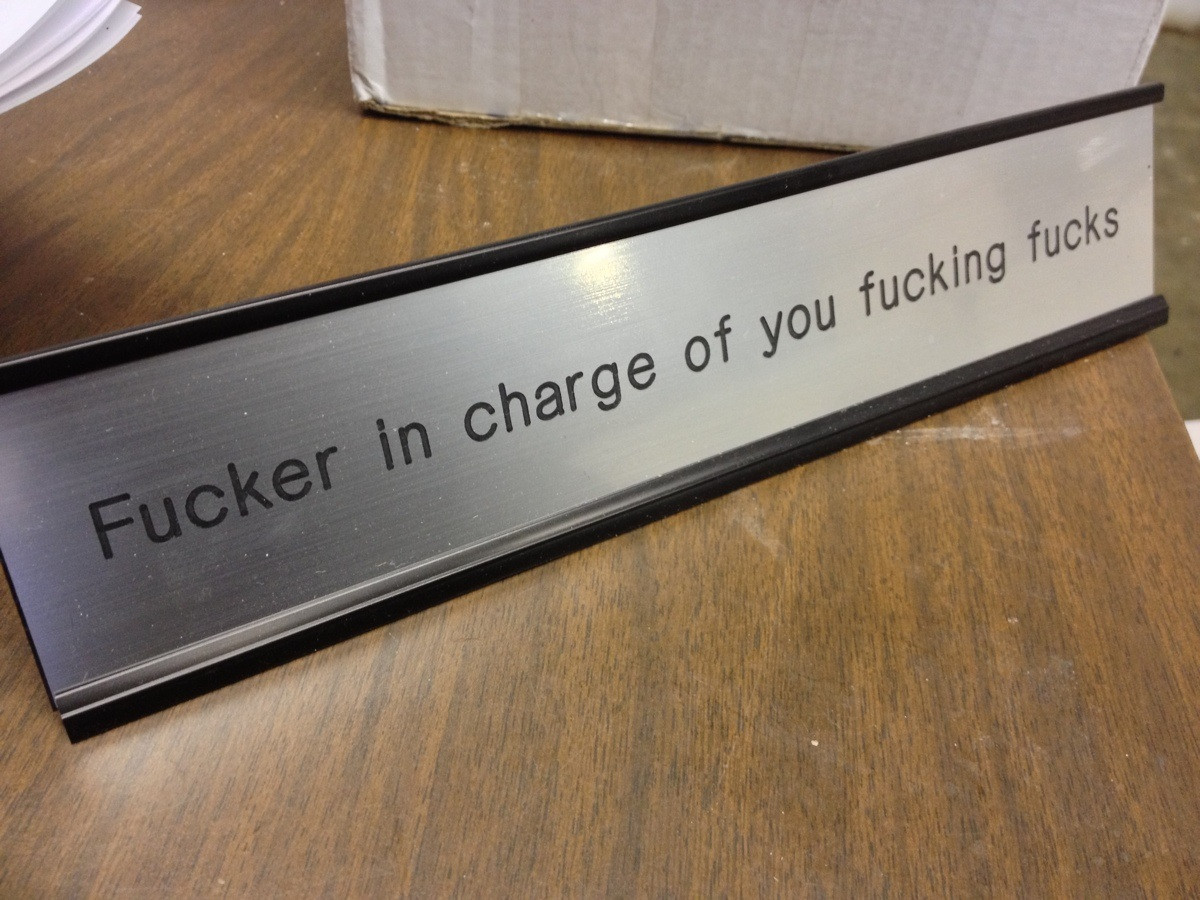 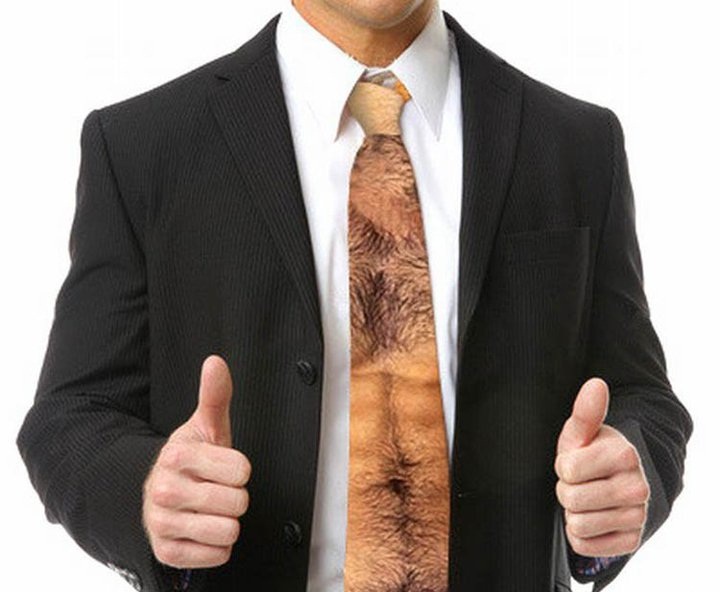 44. Offer to help out in the I.T Department for the day [via] 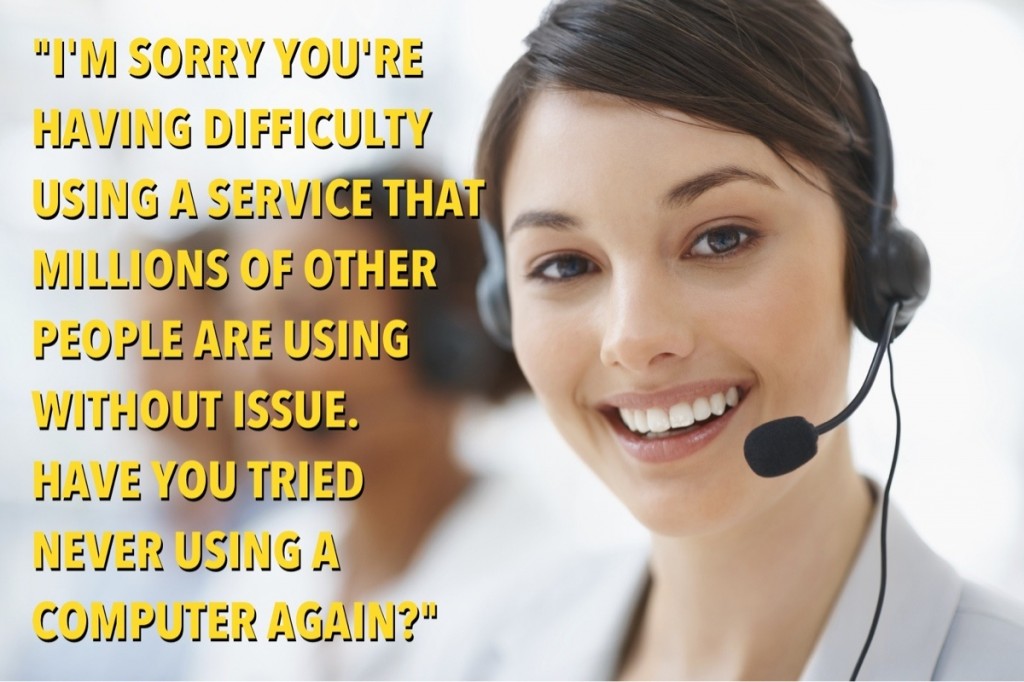 45. Familiarise yourself with the latest office jargon [via]

Adhocracy – a department with little to no process or organisational ability

Administrivia – vitally important stuff that managers leave to everyone else

Agenda Bender – a co-worker who is easily side-tracked in meetings.

Brandalism – sticking company logos on everything and anything

A Buellerlemic – an employee addicted to throwing a sickie (via @the_wonderer)

Chartist – an accountant with a deep love of graphs

Chinese holiday – taking a five minute break by faking the need for the loo and just sitting on a china latrine, head in hands

Cybernating – snoozing at your computer

Deja-moo – bullshit that you’ve heard before

Delegut – A representative at a conference whose sole contribution seems to be that of demolishing the lunch buffet. (@alienonline)

The Dopeler effect: Tendency of stupid ideas to seem smarter when they come at you rapidly (via @liencam)

Ego-Surfing – Searching Google for instances of your name. (via @andybwhittle)

Flashturbation – self-congratulatory and excessive use of animation in Powerpoint

Fleemail. Email delegating responsibilities whilst avoiding confrontation, sent just as your boss is about to leave (via @alienonline)

A Friday FOE. Someone who tends to leave early for the weekend. (ie Fucks Off Early) via @YouNoPayMeBunt

Googlenosis – looking up symptoms on the web to make your sickie more believable.  (via @FullMetalAnnie )

Google Zoo – when an entire office is pretending to work

Horizontal Promotion: climbing the career ladder while laying on your back. (via @GazzaB162)

iTea department – a group of individuals who break up their day with excessive kitchen loitering. (viathe_wonderer )

Kebab manoeuvre – packing up low quality products, heavily marketing them and selling at an elevated price

A Middleton – posh, pretty dimwit in the marketing dept who is only killing time until she marries into money  (via @mothmun)

Mushroom Management. Keeping staff  in the dark and covered in shit. ([email protected]matwhite80)

Open Kimono – throwing an idea out, but being open to criticism

Pope-ing it – when losing the real argument during a meeting, to take the moral high ground

Putting socks on an octopus – an impossible task

Shirking from home (via @texanbar)

Stroperator – the mardy bitch on reception with an over-inflated sense of importance. (via @abbiehas)

Teahydrated – the urge, nay the need for tea (via @will_woodward)

Teflon Shoulders – nickname for co-worker who offloads work to others, a drop of the shoulder and it slides off onto someone else (via @RobWeatherhead)

T.W.A.T – a person who doesn’t work Monday or Friday – only Tue Wed And Thu (via @martinmitchell )

46. Because paper jams are ‘hilarious’ [via] 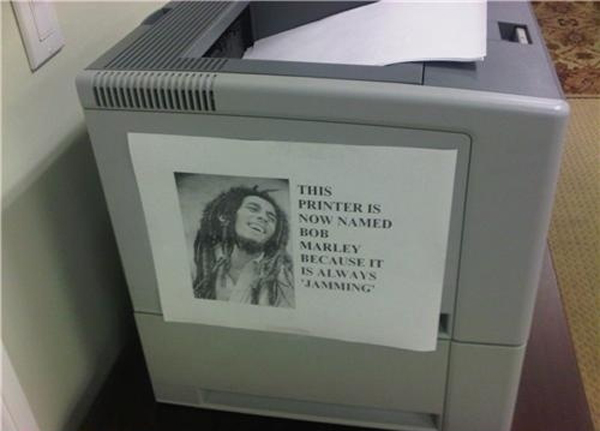 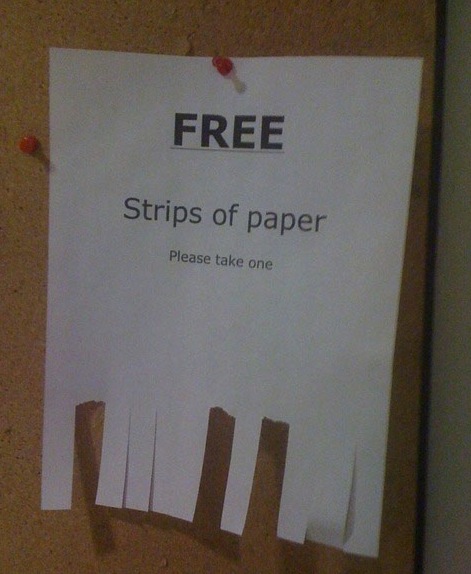 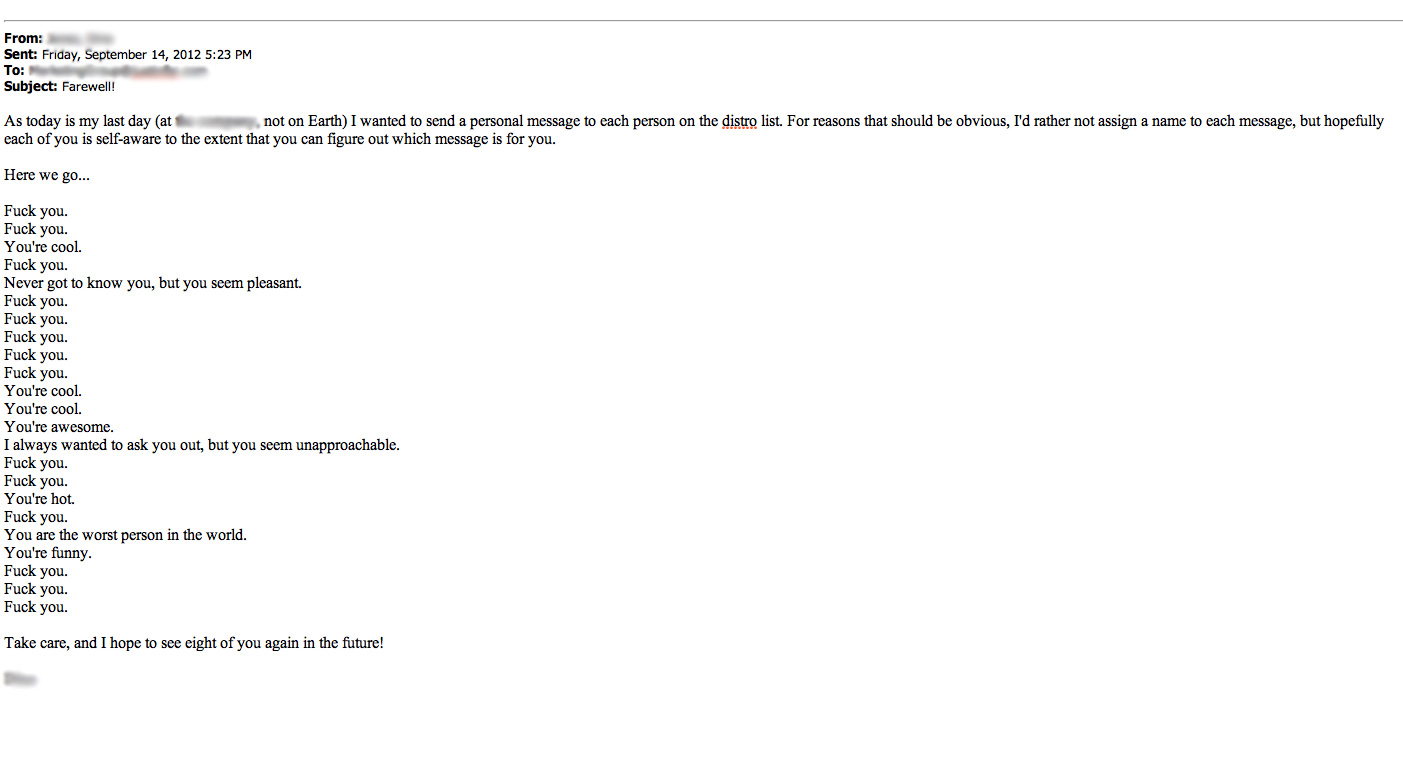 >> 25 Unfortunate publishing layouts of our time

>> 50 ways to liven up your working day at the office

>> 25 Reasons Why You Should Love Music Festivals

Can’t decide which TV show you want to be on? This might help…