Outrage As Sir Ranulph’s Fingertips Are Withdrawn From Internet Sale

Ranulph News: A auction listing purporting to offer the frostbitten fingertips of British explorer Sir Ranulph Fiennes has been removed after thousands of complaints. 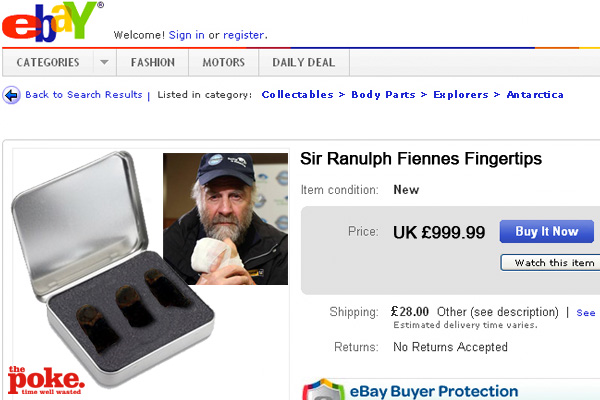 Fiennes recently had to pull out of a 2000-mile trip through temperatures as low as -70c after developing frostbite during preparatory training in Antarctica. A new listing on an internet auction site declared that collectors and fans of exploring would have ‘a unique chance to own a part of exploring history’ for a ‘buy it now’ price of under a thousand pounds.

The sale featured three of the 68-year old adventurer’s blackened digits – which he sawed off a few years ago following a previous encounter with frostbite – listed as ‘a beautiful collector’s pieces’ from a ‘strictly limited edition of ten worldwide.’

Sir Ranulph’s media team refused to comment on the auction – but revealed that after raising £15m in his lifetime, attempts to raise more have been ‘severely hit’ by dropping out of the charity trek. “We are having to think outside of the box,” said a spokesman.